Tamarillo used to be called ‘tree tomato’ up until 1967 when it was officially changed in New Zealand to tamarillo. “Tama” implies leadership in Maori and “amarillo” is thought to most likely come from the Spanish word for yellow.

Tamarillos are frost tender, so choose a warm, sheltered sunny site. Even one or two degrees of frost can cause tissue damage, reduce the crop of mature trees and may even fatally damage recently planted seedlings.

Tamarillos are also brittle and shallow-rooted, so protect your plants from the wind.

Plant in spring or autumn in a well-drained site with good levels of organic matter to help moisture retention through dry periods. Good drainage is essential for tamarillo trees as their roots are susceptible to fungal attack and root rots. If you have clay soil, make sure you add compost to the hole and plant your tamarillo proud of the ground.

« Tamarillos love the heat but they also
need plenty of water during summer,
as the huge soft leaves transpire rapidly.

Tamarillos are guild plants which is a permaculture term. In permaculture, a guild is a grouping a plants, animals, insects, and other natural components that work together to help ensure their common survival. So if you have the room, we suggest you grow three tamarillos together about 1.5m apart.

After planting, apply an animal manure for a nitrogen boost, then a handful of volcanic rockdust around each plant and finally compost as a mulch. Compost will keep the roots cool, retain the moisture, keep weeds down and feed the plants.

If you plant a single tree, we recommend staking to minimise potential root-wrenching. If you plant three together, rather than use stakes, which may rub on the fragile trunks, we suggest tying the three plants together to give them each support.

If planting as a guild, when the trees reach around 1.8m cut the tops off. This will encourage branching outwards and the forming of a canopy from which the tamarillo fruits will hang.

Light frosts will naturally prune your trees. After the frost, remove old and dead wood.

If you’re growing trees singly, you’ll need to prune them. Tamarillos produce their fruit on the current season’s growth. If trees are left unpruned, the new fruiting wood gradually extends from the ends of the branches and the laterals, leaving the centre of the tree more or less barren. Frequently the weight of the fruit produced on the ends of long, weak, spindly branches or laterals causes them to break.

Pruning in late winter (August) or not pruning at all normally results in early maturity. Pruning that’s delayed until November results in a later crop.

Light pruning (up to half of the old canopy) results in a heavy, early maturing crop of small to medium sized fruit. Hard pruning (back to near the original forks of the tree) results in a crop that’s lesser in quantity but larger in fruit size, maturing a little later than lightly pruned trees.

One of the biggest pests for tamarillo is white fly. Neem oil applied in the evening on 3 separate occasions, 3 days apart each time, will deal with this.

Tamarillos are a member of the Solanaceae family along with potato, tomato, eggplant, capsicum, pepino and naranjilla. Psyllids attack all members of this family. Other than netting your trees, there’s no real solution for psyllids. Plant plenty of beneficial plants nearby and remember the organic gardening principle of keeping everything in high health.

Powdery mildew can also affect tamarillo. Spray with liquid seaweed or milk diluted 10 parts to 1, or mix 1 teaspoon of baking soda to every 1 litre of water or use Flowers of Sulphur diluted in water (as per instructions on the packet).

Efficient weed control is important, not only because weeds compete for nutrients, but they can also act as hosts for insects, fungal diseases and viruses to which tamarillos are susceptible. The shallow-rooting habit of tamarillos should be considered when weeding. Laying newspaper down around tamarillos and layering a good quantity of mulch on top, suppresses weeds effectively.

Tamarillos have a long picking season with the main flush in mid-winter. Select fruit for picking based on skin colour and pluck fruit from the tree with the stalk attached.

The tamarillo is extremely nutritious containing good quantities of Vitamins A, B6, C and E and is rich in iron and potassium. 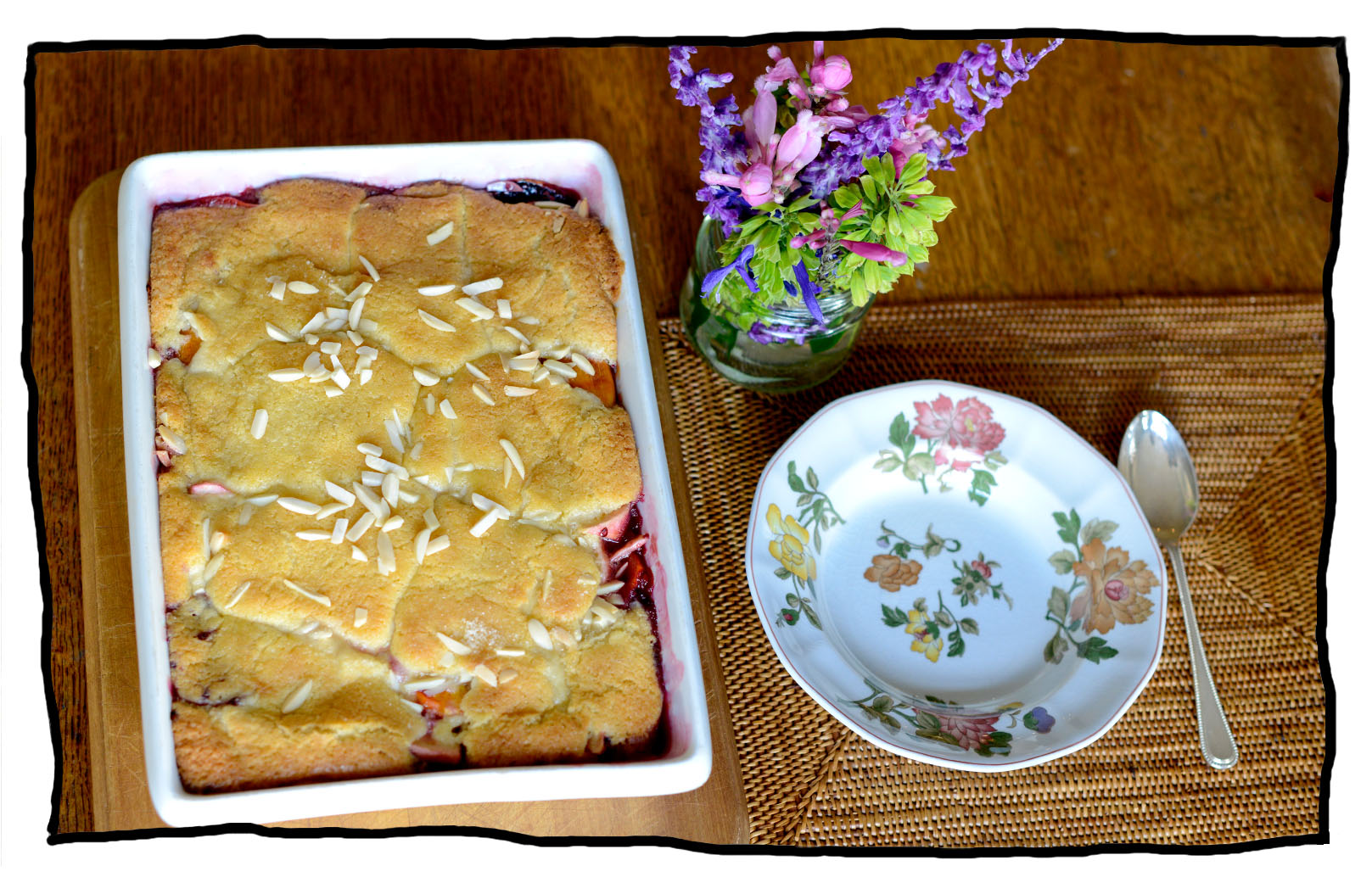 Preheat the oven to 180 degrees Celsius. Bring a large pot of water to the boil. Also set up a bowl of water with ice cubes in it.
Cut a small cross in the base of each tamarillo. Drop the fruit into the boiling water for at least 20 seconds or until you can pull the skin easily off the fruit. Take care not to leave the tamarillos in the hot water for too long though as the flesh can start to go mushy. Immediately plunge the fruit into the iced water. Then peel the skin off each fruit.
Cut them in half and place in a bowl, along with the peeled and sliced apples. Add the brown sugar and leave for at least 30 minutes to create their own syrup.
In a food processor place the flour, baking powder, sugar and butter and process until fine. Add the egg yolk, vanilla essence and cream and process. It’ll be a sticky consistency.
Place the fruit into a 20 x 30cm baking dish. Using a large metal spoon carefully dollop the cobbler in individual spoonfuls over the fruit. The spoonfuls won’t necessarily touch each other at this stage, but they cook together.
Sprinkle the slivered almonds over the top. Cook for 50-60 minutes. You may need to place a piece of tinfoil over the cobbler after about 30 minutes to stop it from burning on the top.
Fabulous winter dessert!

« Tamarillos are a quick return crop with the first harvest approximately 18-20 months from planting.