pears are the least fussy of all fruit trees to grow

Choosing a variety of pear suited to your conditions is the best way to ensure you’ll get a healthy harvest each season.

So purchase from a local grower who will sell you a bare-rooted tree (better than a bagged one where roots can become confined and entwined).

Like most fruit trees, pears are typically grafted. The traditional rootstock for dwarf pears is quince, which produces a tree that is 2.5 – 3 metres tall. Larger trees will be grafted onto pear rootstock.

« Pears are either European or
Asian (also known as Nashi pear or ‘apple-pear’).
The most common is the European pear,
which has the typical pear shape.

Most pears need a pollinator (see table below). If you have a small section, you can buy a dual or triple pear tree and the varieties pollinate each other.

Plant pear trees in full sun with good air circulation. Soil should be deep, well-drained and slightly acidic (pH 6.4 to 6.8). Add a good amount of compost to the hole, creating a mound to splay the bare roots over, then cover with soil. Make sure the tree ends up sitting proud of the ground and that the graft union is about 5cms above the soil surface. Prune the tree back by about 25 per cent. Then mulch generously, and for the first few years, water weekly during the summer months.

When it comes to pruning, it’s best to train a pear tree so it has one central leader.

Fertilise pear trees once a year in early spring with a few handfuls of Natures Organic Fertiliser and some sheep pellets.

Codling moths affect pears less than they do apples, but they can be a problem. You can control them by diligently picking off damaged fruit, with the larvae still inside, and disposing of it. Be sure not to put the affected fruit in your compost heap. Or you can hang codling moth traps in your tree in early spring. See here for how to make a codling moth trap.

Pears ripen from the inside out, so it’s best to pick pears 3-4 days before you want to eat them. Left to ripen on the tree, they may become mushy and over-ripe.

Here are some reliable varieties: 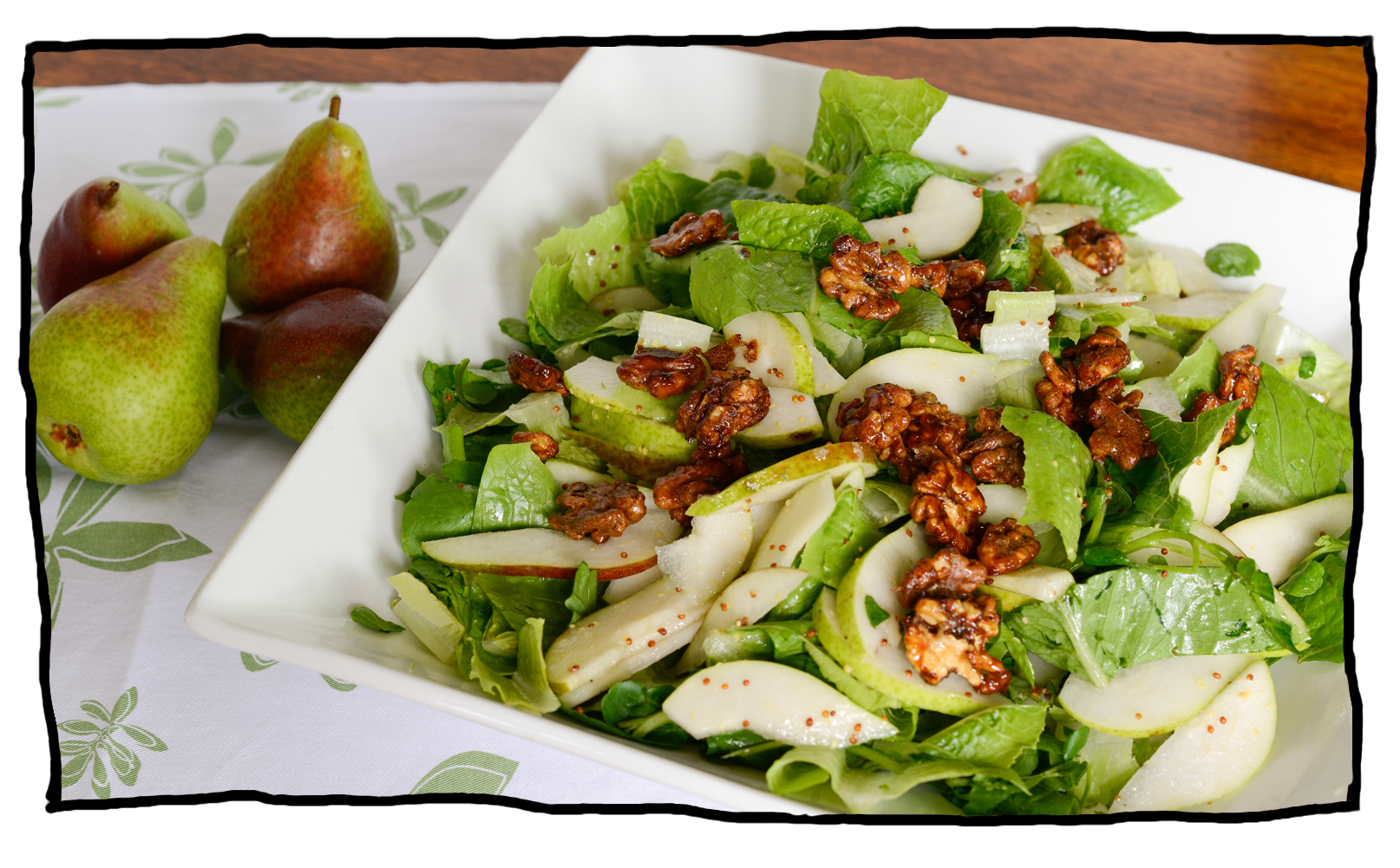 1 bunch watercress, leaves only
cos lettuce leaves, chopped
1 or 2 pears

Honeyed Walnuts
Pre-heat oven to 160 degrees.
Warm honey in a double boiler or in a bowl placed in a pot of hot water. Stir in the soy sauce, cayenne pepper and the walnuts.
Spread the mixture out on a lined baking tray.
Cook for 15-20 minutes, turning the nuts every 5 minutes, until they’re golden and the honey has formed a thick glaze over the walnuts. Remove from the oven and separate the nuts while hot, otherwise they’ll stick together on cooling. Sprinkle with the salt and leave to cool and harden.

Dressing
Whisk everything together and season with salt and pepper.

To serve
Cut the pear(s) in half and cut out the core. Slice thickly and toss with half the dressing.
Put the cos and watercress leaves in a bowl and toss with just enough dressing to lightly coat the leaves.
Transfer to a serving platter and scatter the pears and walnuts over the top.
Serve immediately.

« The old saying "plant pears for your heirs" is true as it can take 5-6 years for a pear to start fruiting well.