Summer is almost here.  And what a brilliant entrée we’re having to it – warm temperatures and rain for days on end, so everything is growing well.

We start with chopping down our green manure crop.  It had become quite magnificent, and I was sad to be chopping it down without a little hint of flowers. 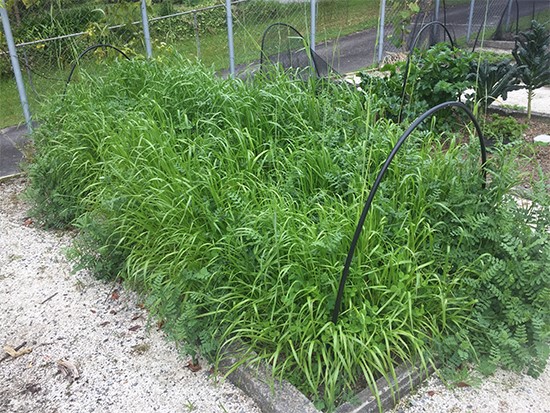 There were a few clovers showing through, but I would like to have seen the hairy vetch flowers.

Anyway it’s time to prepare this bed for some of the fruiting vegetables, so away I worked with my trusty fork, releasing all the plants and layering them up.  Ideally you would give these plants a good chop with a nice sharp spade, but since I don’t have one, they are as is.  The key is a good application of lime which helps break it all down.  I’m hoping in a couple of weeks to be able to create some spaces in amongst it all to plant zucchini, cucumber and watermelon.

We have our kumara slips underway.  Mix equal parts of potting mix and sand and bury an organically-grown kumara in the container. Water well and keep in a warm spot.  In 2-3 weeks we should have enough growth to pull slips off and plant. 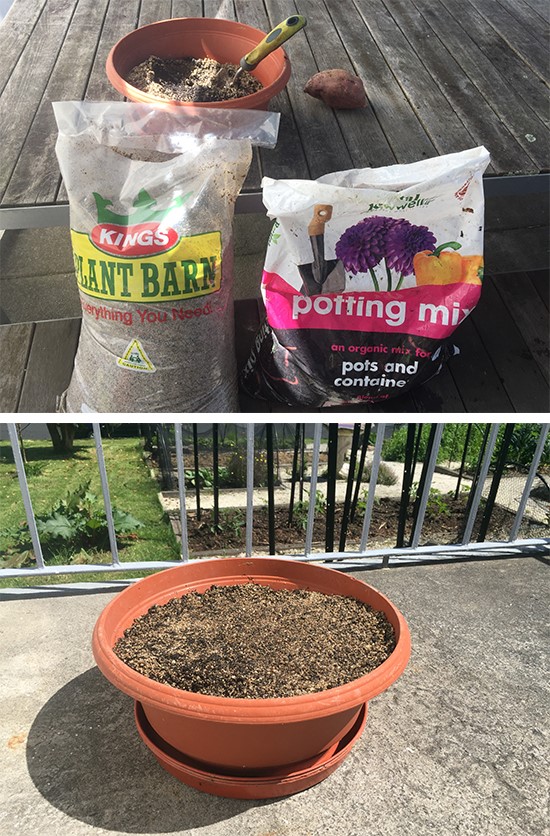 The peas and beans, direct sown in their cells, had got a bit leggy, but I was waiting until the Last Quarter had past, as it’s not a time of great growth.  I wanted them to grow up the screens where there isn’t a permanent climber, so that meant having to pull a few beetroot out for the peas and nestling the beans up against the strawberries.  Peas and beans like an alkaline soil, so I added lime to their planting area and some good compost and in they went.  They’re not fussy plants, so I hope they pull away easily.  (Peas just resting on the beetroot for support until they get a bit stronger.)

The bean/strawberry combination is not the best, since beans like alkaline and strawberries like acidic soils, so I’ll try and not do that again! 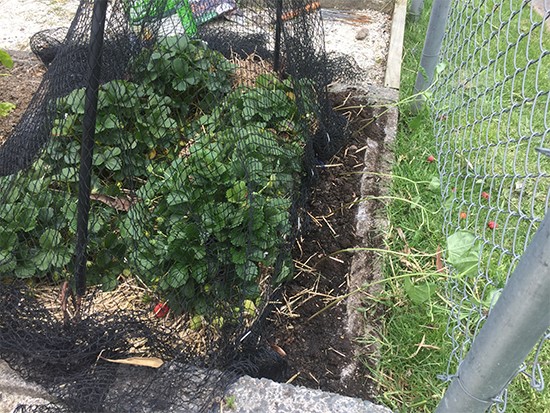 As it’s the New Moon, it’s the ideal time to plant leafy greens and our lettuces (Cos and Canasta) in the paper pots were ready for planting.  Into their planting holes I added chicken manure and rock dust (Natures Organic Fertiliser) to give them a good boost.  And watered them in well. (The Cos lettuce in the second image isn’t planted yet.)  And don’t forget yeast traps for the slugs!

Sweetcorn is classified as a leafy green, because it’s a grass, even though you would swear it was a fruiting vegetable.  Anyway, now’s a great time to plant it.  As they’re so tall, it’s best to plant sweetcorn on the southern end of a garden bed, so they don’t throw unnecessary shadow on other plants.  The bed I had my eye on has some late cabbages in it still, so I just decided to plant the sweetcorn around them, as the cabbages will mature before the corn gets going.  Corn really needs feeding.  Rob says, give sweetcorn double what you would lettuces.  So I did.  Firstly I forked through the existing soil to aerate it, then added the last of my current batch of compost, a generous amount of chicken manure, then rock dust (Natures Organic Fertiliser) and worked it all in.  Sweetcorn plants should be planted around 40-50cms apart and in a block rather than rows because it’s wind-pollinated. On a windy day, the pollen from the male tassles falls onto the female cob.  In they went, a good watering, and netting at this stage until they get bigger. 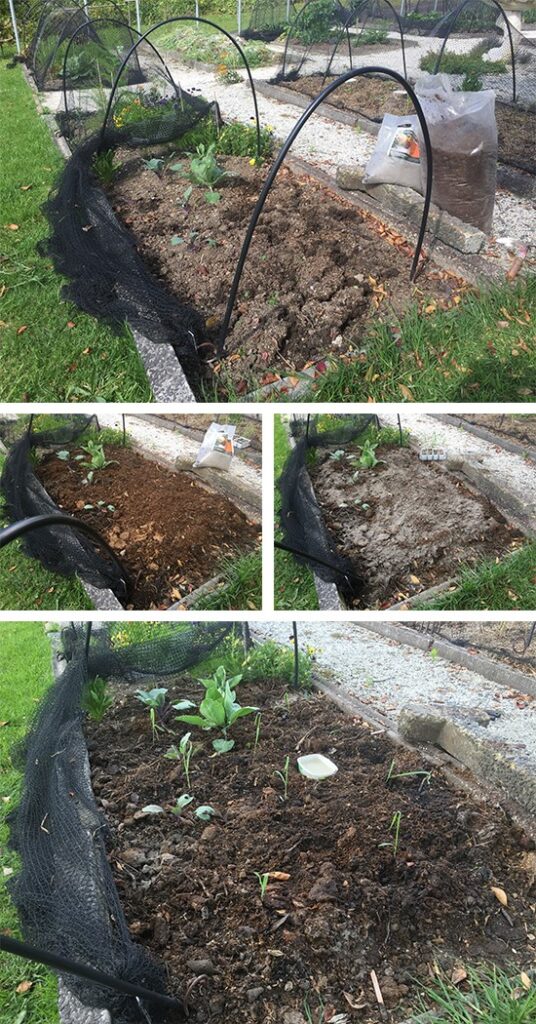 Our parsnips have germinated well and today it was time to give them a thin.  You can see the Rocket potatoes on the right are up (the first ones). 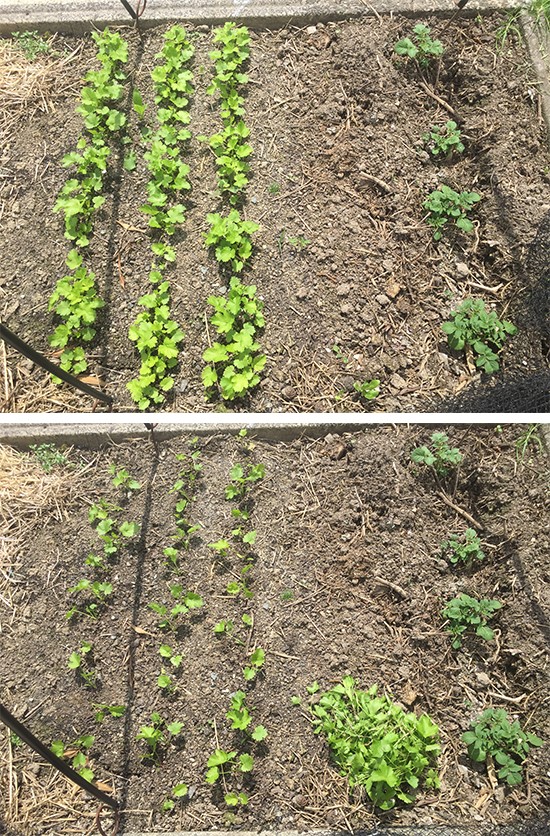 The onions are doing well and are almost ready for harvesting. 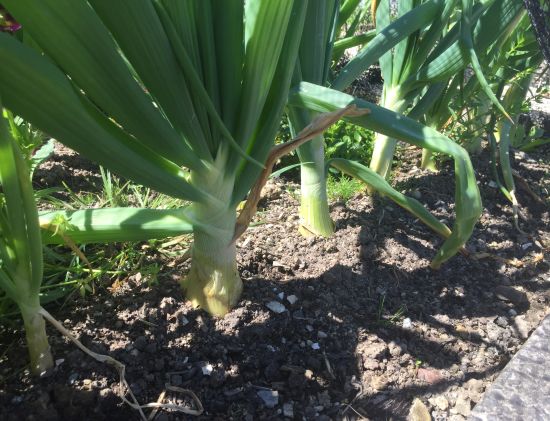 And the tomato plants are good and strong and shooting away.  Next week I’ll start doing some preliminary delateralling but currently there’s only one leader on most of the plants and it’s quite good to have two. 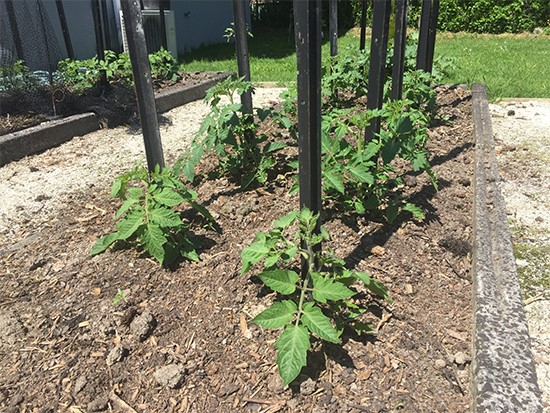 Here’s our next batch of plants coming along – cucumber, watermelon, eggplant, capsicum, pumpkins and a very leggy zucchini which I’ve held off planting out for too long because I want it to go into the green manure bed. 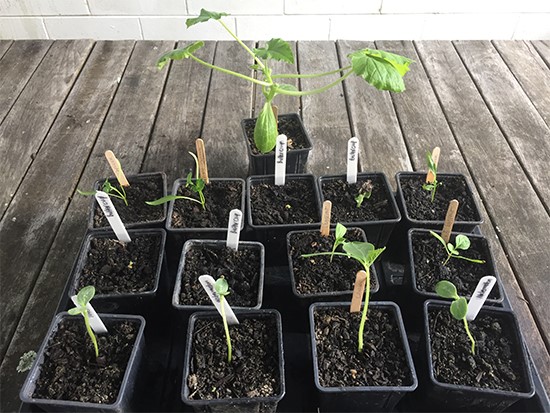 From Jan and Rob.