We hope you’re all adjusting to the “new normal” and making the most of it. There is a great sense of solidarity in a crisis and that can only be a good thing. 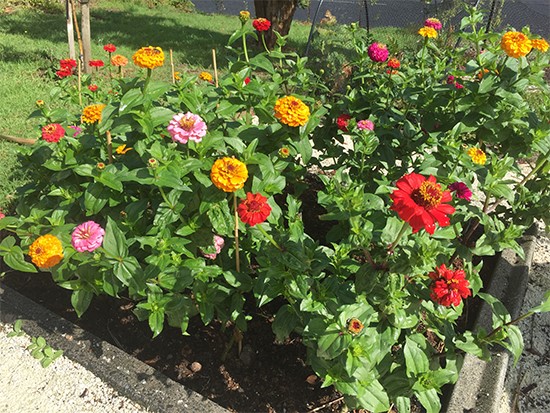 My zinnia bed is just lovely and cheers us up – I was aiming for “a riot of summer colour” and I think I’ve achieved it in autumn! A few little plants in the middle are yet to flower, so that will bolster it up a bit more.

The Agria potatoes are flowering too. They’re big strong plants, so it’ll be interesting to see how many potatoes we get. I bedded them in with straw when I couldn’t hill them up with soil any more. 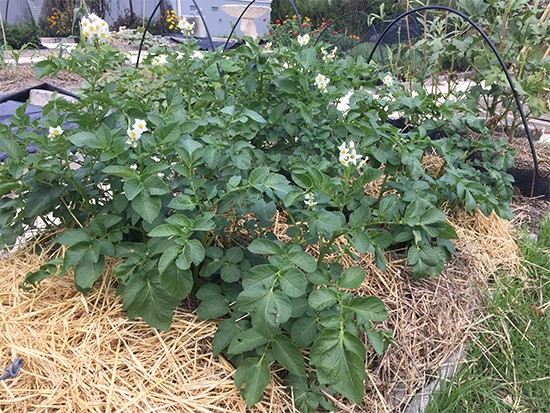 It’s good to leave your pumpkins on the vine as long as possible. That means you give them the best chance of storing well. We got these four from the one vine, then in a late summer burst, the vine popped out two more little ones. They are delicious! 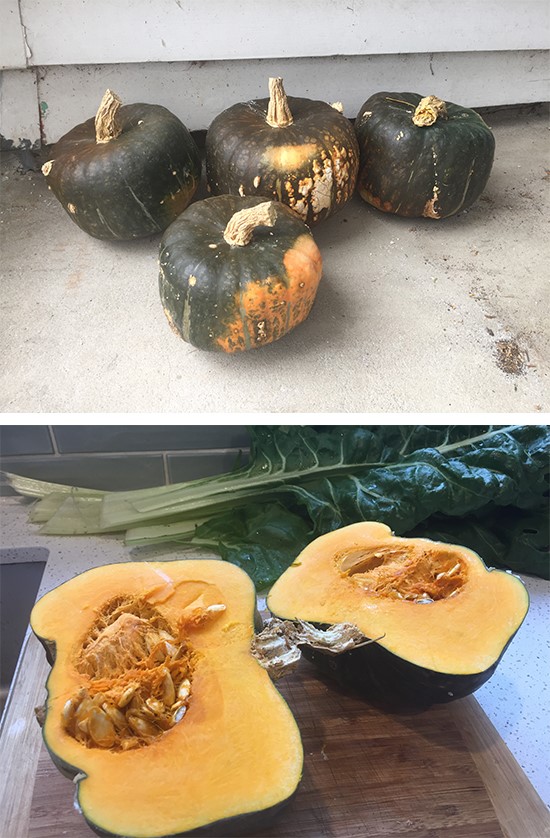 This is a very good video by Rob of how to harvest pumpkins properly for storage. They can last at least 8 months if done well. If you have lots of pumpkins, it’s really worth following. I haven’t done this with mine because Rob said that because they were sunburnt that they wouldn’t store – that the sunburnt parts would rot. So far that hasn’t happened, but just today I did find one going off on a sunburnt patch. That will be eaten very shortly!!

Our tomatoes have finished. I’m keeping them in for now as the Gardener’s Delight cherry is still producing just enough for us to enjoy on salads every now and then. But underneath them the basil is flourishing. It’s going to seed now as we’re not using it as much, so I’ve picked it all and made pesto. See the recipe here.

The Mediterranean herbs are all flourishing too and this week we used them in Moussaka, which is a good recipe for eggplants. 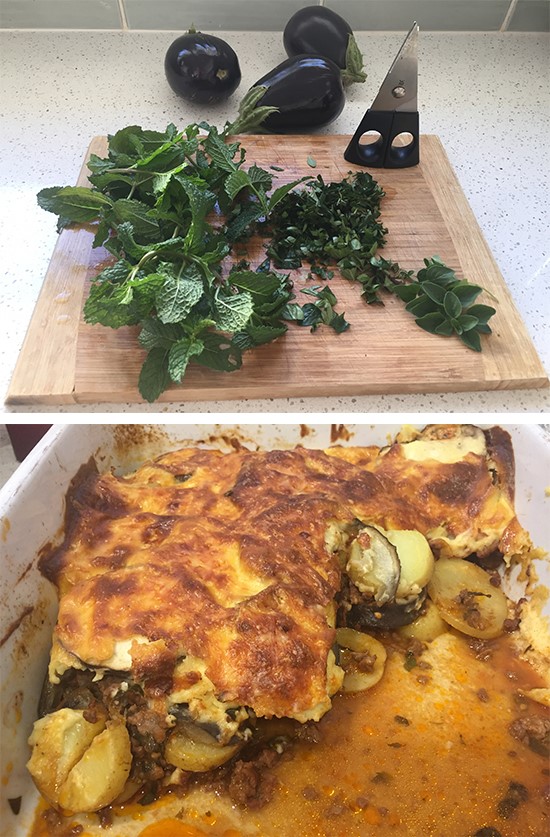 I can now show you my onions and leek seedlings as they’ve had plenty of light and are now upright. They’re ready for planting out. 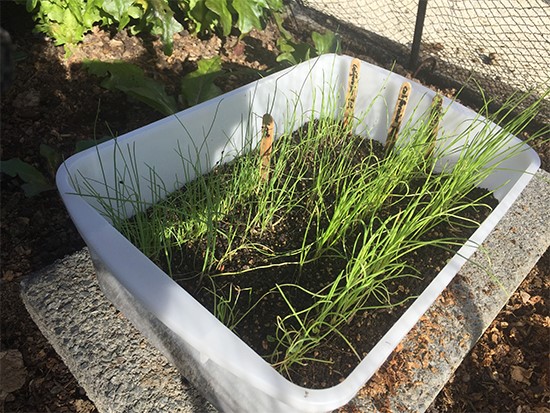 They’re going in what was previously the zucchini and cucumber bed and as those plants have taken quite a lot of nutrients out of the soil, I’m adding a bag of bought compost because we don’t have enough of our own on site. The bought compost is not organic unfortunately, as I just managed to get a few bags before the shops closed, but our organic growing practices will sort that out. Friability of the soil is key for these crops, so I fork it all through to free it up.

Then it’s mounds for the onions and trenches for the leeks. We eat a lot of onions, so I’m going to dedicate this bed to them. I’ve got Californian Red and Italian Longkeeper. Two brown and one red row. I’ll pop the leeks down where the beans and peas currently are. The plan is to plant asparagus in that bed, but I can just plant half of it in asparagus and the other half in leeks. 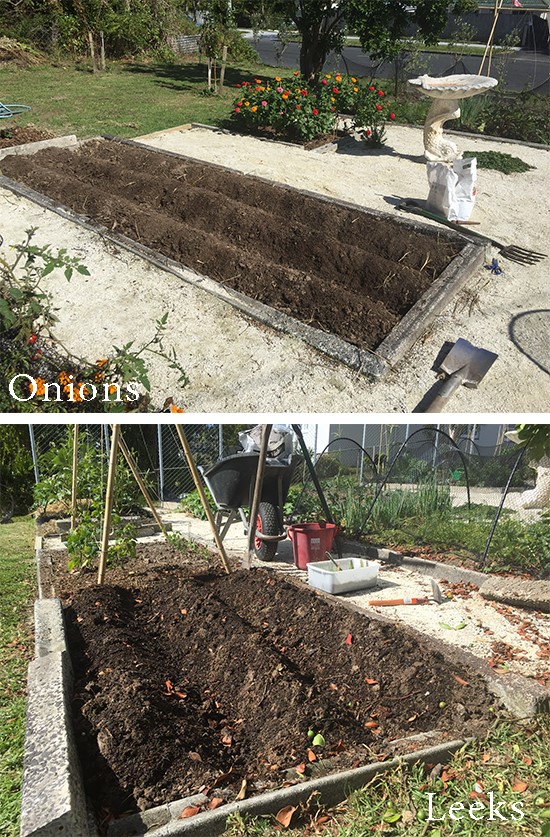 I have way too many onion and leek seedlings – got a bit carried away there! So I just take out a bunch (cut out with a knife), wash the soil off in this bucket of water, to which I’ve added a splash of liquid seaweed. In theory you trim the tops and bottoms with scissors before planting but I feel my seedlings are quite small and don’t need trimming. The onions go 15-20cms apart and the leeks 10cms. A dibber is a useful tool for this job. Then a sprinkle of rock dust (Natures Organic Fertiliser) round the plants and water in well. Important not to let the beds get weedy as weeds can smother this long-term crop.

Have a look at Rob planting onions and leeks in this video.

My cavolo nero Kale is ready for planting, so that’s going in with the kumara for now. There were potatoes here previously, so that’s fine (as far as crop rotation is concerned). Actually I am extremely grateful to the potatoes for making the soil lovely and soft and fluffy aka friable. I’ve added some compost and forked it through the soil. 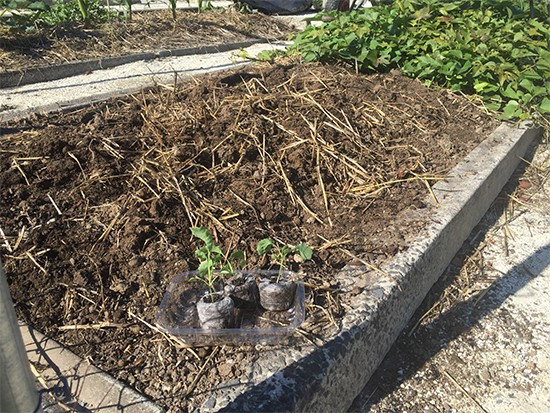 Into the planting holes I add Neem Tree granules to ward off any attack by white butterfly which might still be flying at this time of year. The plant takes up the neem systemically which lasts for about 6 weeks, after which time the plant is strong enough to look after itself. 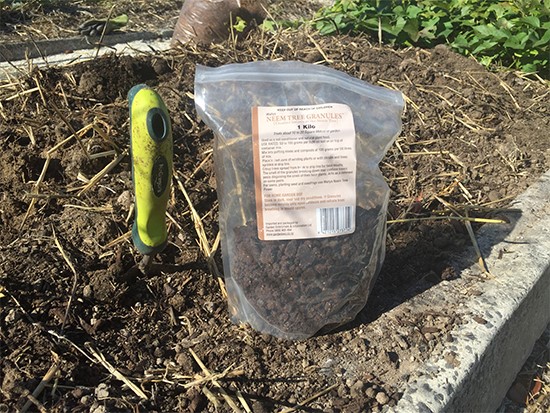 After planting I add some chicken manure, then rock dust (Natures Organic Fertiliser), water it all in and cover the plants with hoops and netting. 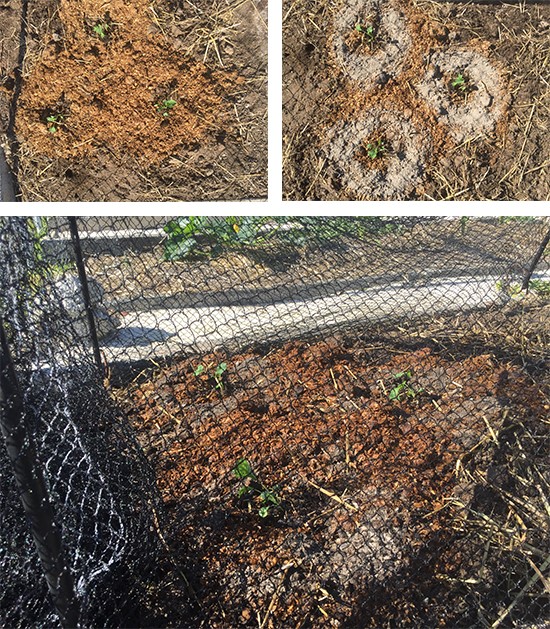 I had planned to put rhubarb in the bed where the kale went in, but when I picked some rhubarb up from Rob’s last Monday (just in time before The Lockdown and before his departure from his property), I realised rhubarb takes over the garden bed a bit and space in our garden beds is at a premium. So it got planted in the fruit trees area and seems to have claimed its space happily. Rob’s rhubarb is a passed-on treasure and it feels special to have some of it at my place now. 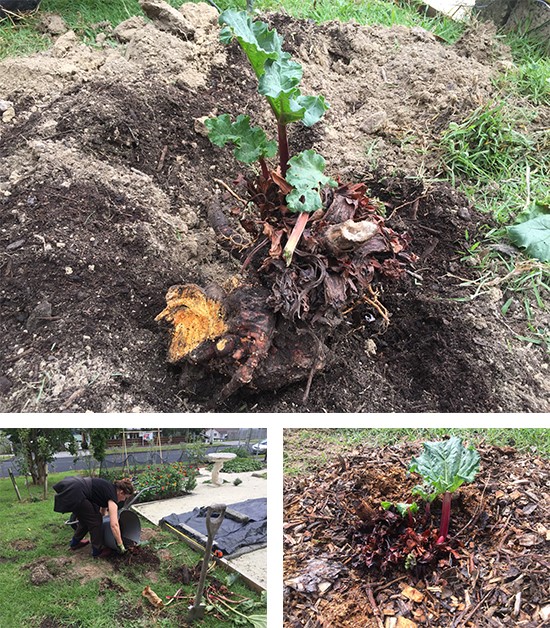 See Rob transplanting rhubarb in this video. Best done in spring if you have the choice. 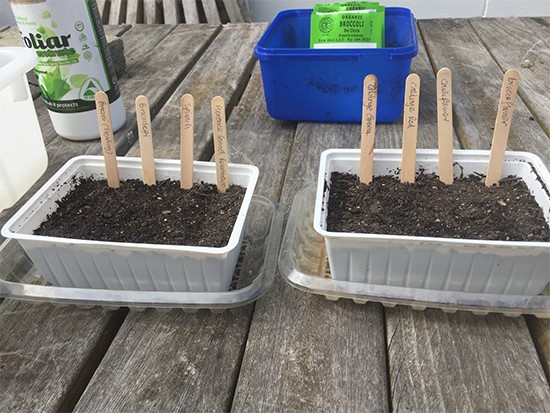 And lastly, I thought I would sum up the strengths and weaknesses (and lessons learned) of my summer garden.

Not so great crops:

Florence Fennel – I didn’t grow it quickly enough at seedling stage and it sulked in the ground and was tough.

Tomatoes – I started off watering them at night and they all got late blight. Nevertheless they fruited well and we got lots of jars of Relish, Sauce and straight preserved tomatoes for cooking with, as well as enjoying fresh fruit. The Romas were brilliant for preserving – tasty! And Gardener’s Delight was superb – in taste and longevity of fruiting.

Eggplants and capsicums – nice vegetables, but could have been bigger. Rob said I probably didn’t feed them enough. Capsicums had some blossom end rot too, so more gypsum in the soil next year.

Sweetcorn – I had problems with when to harvest it. Picked one when it was immature, then left the others too long and most of them were a bit past it. Also I didn’t have very even coverage of cobs – need to shake the male tassles next time.

Watermelon – the one I harvested at the right time was out of this world, but I got harvesting wrong with the 3 others!

Lettuces – all our leafy greens (including mesclun and rocket) were great, but I did try to grow Iceberg-type lettuces when it was hot and that didn’t work. Also I didn’t keep to my regular sowing and planting schedule and we could have done with more than we had.

Second cropping of beans, zucchini, cucumber and sweetcorn – I don’t believe I got them in early enough and since March is cool this year, they are growing but not yet producing vegetables and I think they will struggle. Really got to get them in early January and I was probably a month late.

A couple of visitors this week which were re-located outside before they ended up in the spinach pie and pesto! 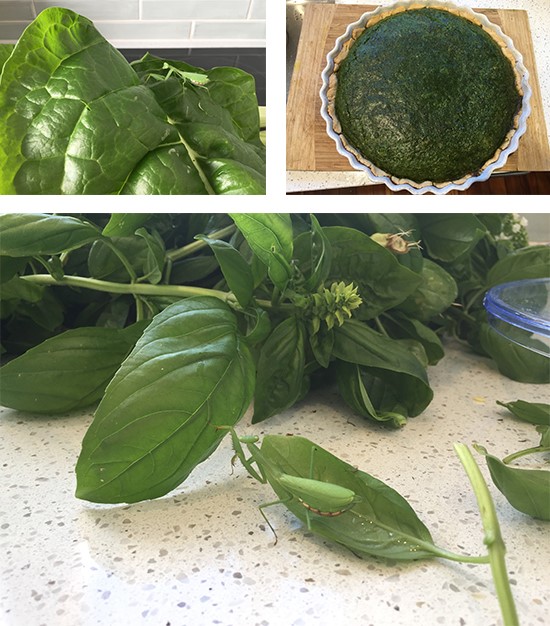 Keep safe and inspire your family, friends and neighbours to grow food!