Our beans, cucumbers and zucchinis are going nuts as they do at this time of the year. We’re freezing some of the beans, giving the cucumbers we can’t eat away to our sons who are flatting and eating the zucchinis in every which way as well as making some pickles. 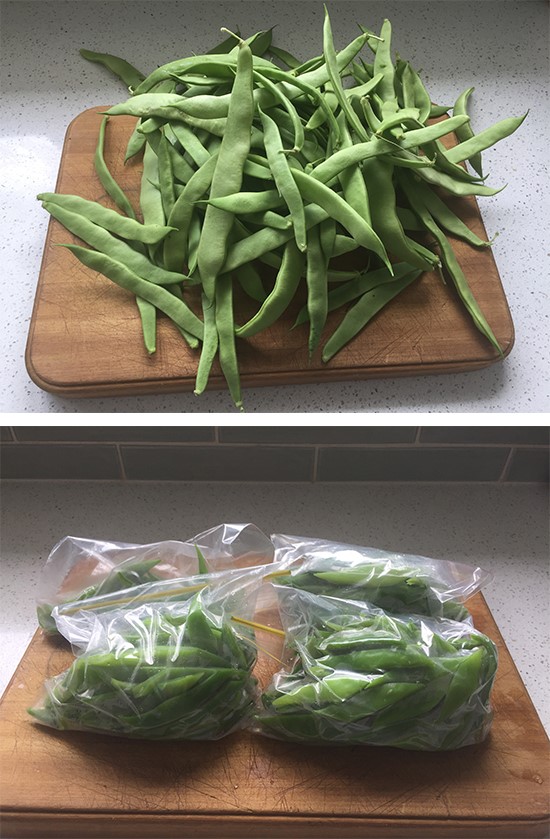 See Rob’s tips on freezing beans here. Apologies for the sound on this video! You can always just read the text. 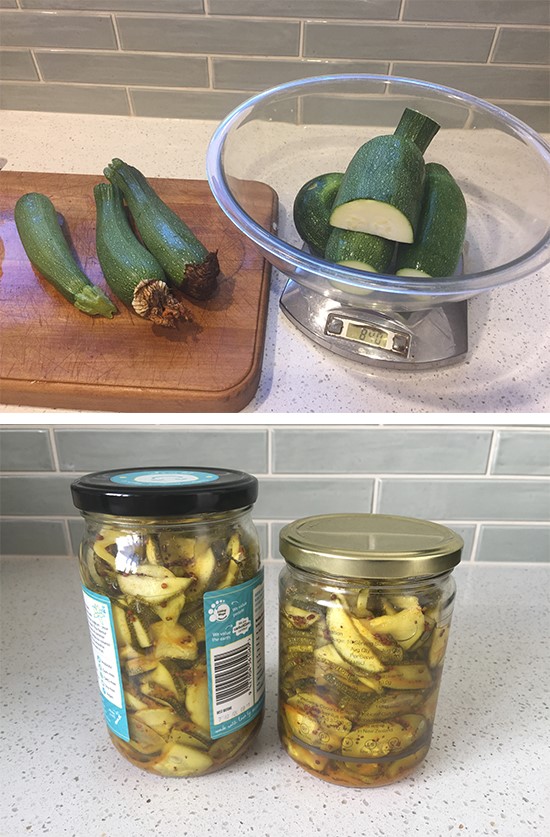 I was looking round for a good zucchini pickles recipe and I like the guys (Lentil and Matt) at Grown and Gathered very much and was delighted to find such a nice write-up about zucchini and pickles on a blog post of theirs from a couple of years ago. They were just moving to a new property, like we have this year, and were lamenting how their zucchinis weren’t doing as well as they had hoped and had this to say…

We have had our challenges at the new farm. Normal challenges, as Matt continues to remind me – it’s about learning the new place, the new environment, the new surroundings. It seems that the frost lasts for longer and there is less of those wild plants we love. So that means there are more slugs, snails and insects. But it’s the best reminder of nature, that it needs the balance of those wild plants (companion plants!) so that the insects and plants are in balance. And that each place you live, will be different, and you have to learn it and observe it. And we have to be patient as the wildness grows and things balance.

It sounds like they’re talking about my tomatoes. The only tomato plant to give us ripe fruit so far is the yellow cherry ‘Honeybee’ and that has been producing for a couple of weeks at least now. The tomatoes are sweet and delicious. But, the plant is not doing well. I think it has late blight. And I think I might have helped cause it by watering in the evening, which provided a nice damp environment for the fungus to grow. I have now learned that watering in the early morning is the best time and that plants can store excess water. 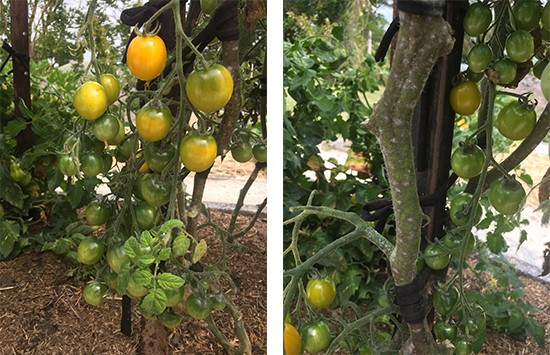 I’ve researched the treatments and what I’m going with is Natures Way Fungus Spray which is a combination of copper and sulphur. Copper is not used by organic gardeners usually because it is toxic to beneficial soil bacteria, fungi and earthworms, but as our soil is not home to many of these good things yet, I think it’s worth trying. I understand, unlike other fungal diseases, late blight doesn’t overwinter in the soil, but I will make sure that these tomato plants leave our property at the end of the season and definitely not plant tomatoes in this bed next year. I’ll repeat an application of this Fungus Spray in a week’s time. As Lentil is saying above, it takes time to get soil finely tuned with living organisms that will help contain the fungus, so I can’t be too harsh on myself. 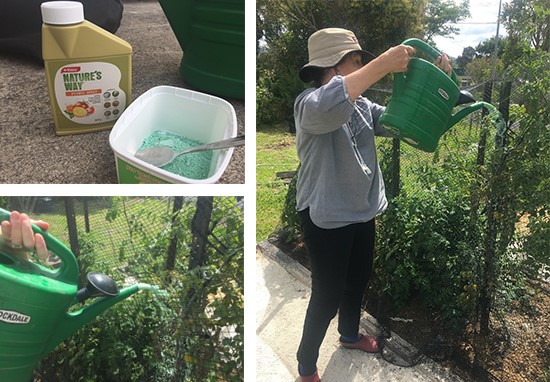 The other issue I’ve had with our tomatoes is holes in some of the fruit, but as I was doing a bit of a tidyup the other day, I found this little critter (and I have seen one white butterfly on the wing laying the eggs for these guys to hatch out of) and I reckon I can put it all down to this one caterpillar. Have a look at the feed it’s had on this one basil plant (which I discovered when lifting the ‘Roma’ tomatoes off it)!! 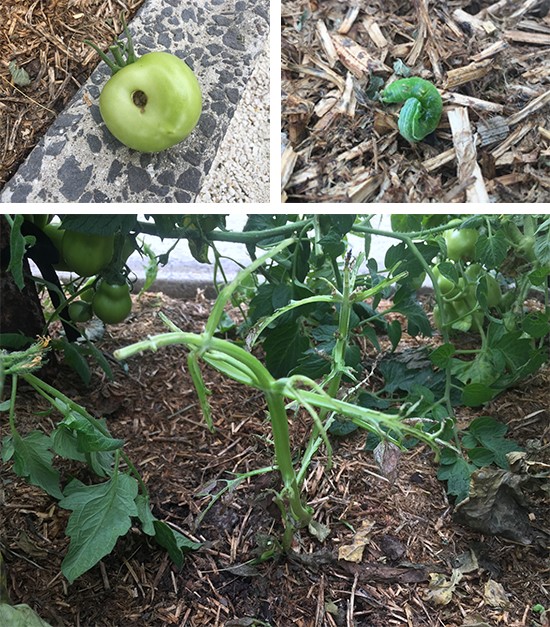 After letting the rocket and meslun go to seed and flower, I’ve taken them out and trenched into this bed the material that was ready to use in our Hungry Bin. I found it a bit ripe and not fully broken down, so I trenched it rather than laying it on as a top layer in this bed. Our Hungry Bin is full and as there were no worms in this material, I figured it was as ready to use as it ever would be. (These images are a bit orange because I was gardening on the day we had the orange smoke haze from Australia! It’s a bit hard to make out the worm compost in the trench.) 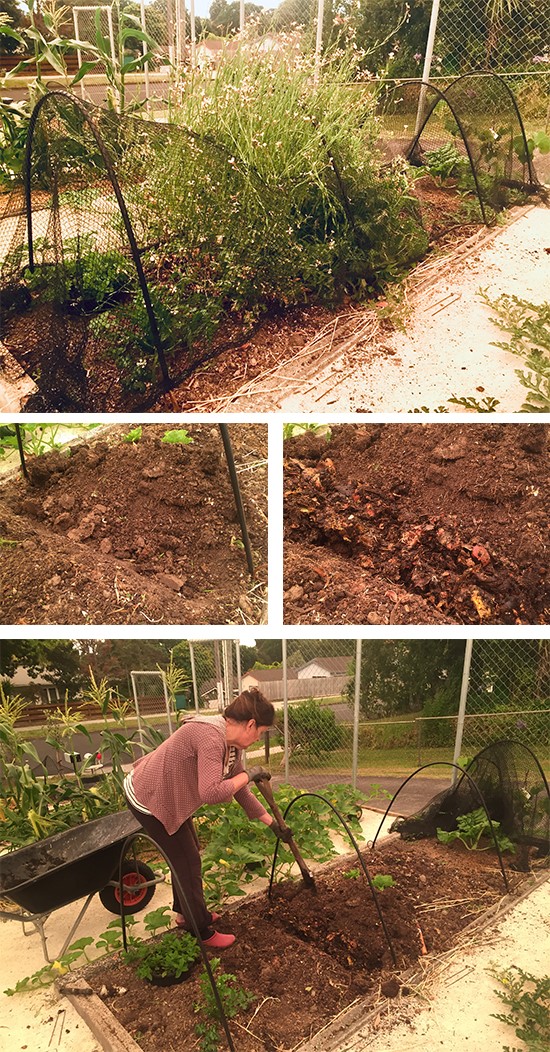 The ‘Great Lakes’ lettuces are growing slowly in this bed and I think it could be too much sun, so I’m laying some shadecloth over the netting to cut that exposure down. This one is 50-60% proof. 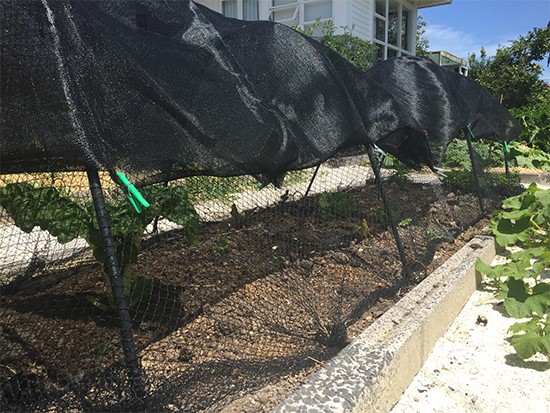 Another zucchini and cucumber seed sown and 4 more sweetcorn seeds. And 5 more bean seeds poked into the soil on the other side of our bean structure. 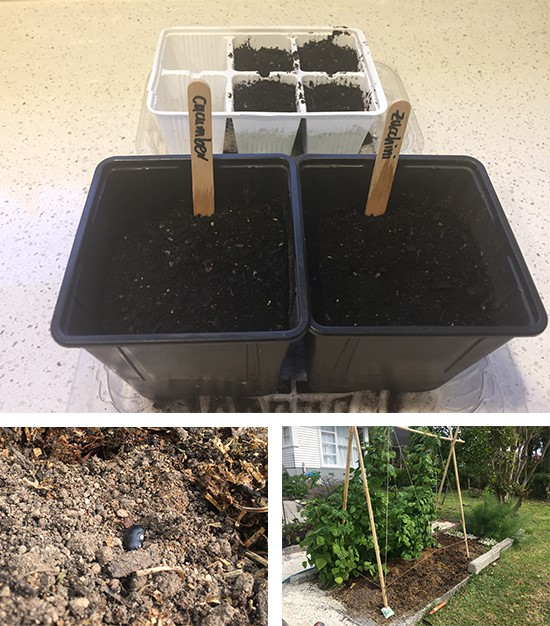 More liquid seaweed on the zucchinis, cucumbers and pumpkin to prevent powdery mildew and Fish and Seaweed on the capsicums to get a little more growth out of them – eggplants are fine, but the capsicums could do with a boost (I think they had a bit of hard start with slugs nibbling at them). Notice how I’ve put a teepee of three bamboo stakes round the capsicums to help them carry the weight of the fruit they’re about to bear. 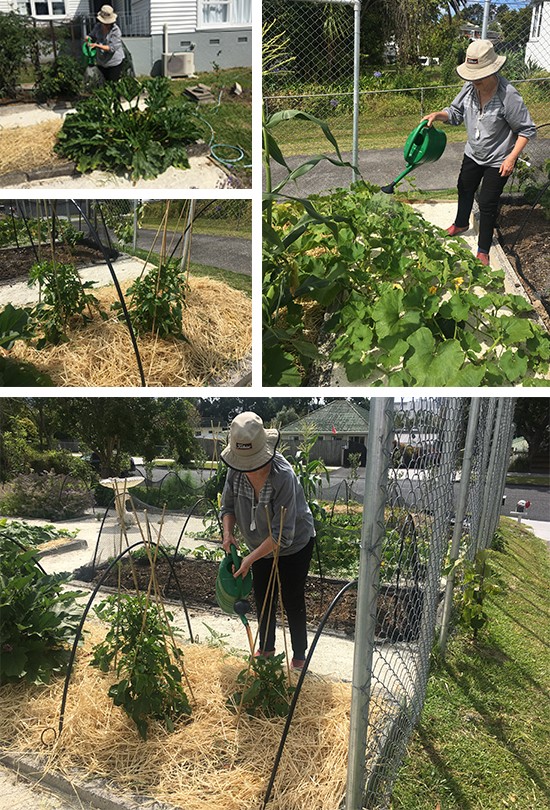 And still enjoying our early season potatoes – these are ‘Cliffs Kidney’. Rob says harvest them no more than an hour before you want to eat them for the best taste. Yum! 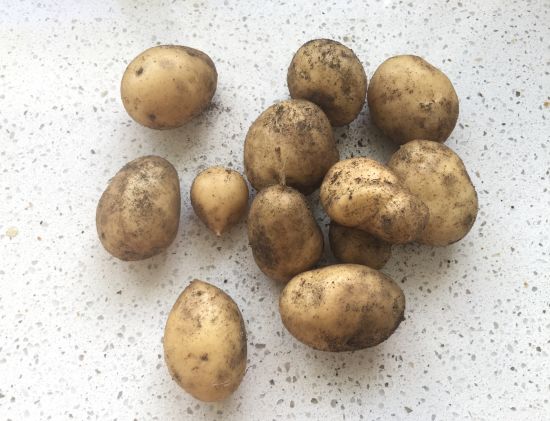