Still quite a bit of rain around, which is most welcome, and the temperatures are perfect for being in the garden.

We’re in the Last Quarter moon phase currently, so it’s maintenance jobs we’re doing this week. We’re mainly going to lay mulch and it’s a great time to do this because there’s still plenty of moisture in the soil. Mulch helps retain moisture in the soil, it keeps the soil cool in the warm summer months which helps keep bacteria and fungi alive, it encourages earthworms to the surface which aerates the soil, it suppresses weeds and lastly, slugs and snails don’t like travelling over mulch so it’s a deterrent for them.

So firstly we get rid of weeds. Tomato bed looking very smart! Weeding gives you the opportunity, while you’re nice and close to the plants, to tie up more branches and do a bit more delateralling where necessary. 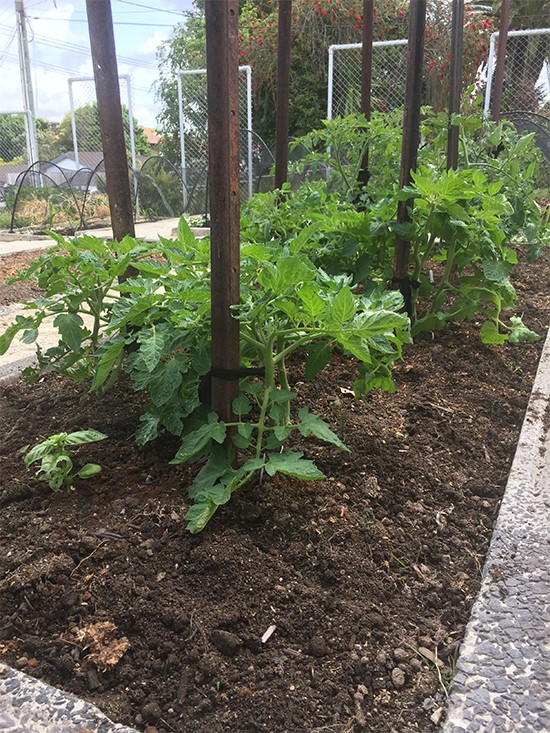 Then we water the soil so it’s moist before it gets covered. 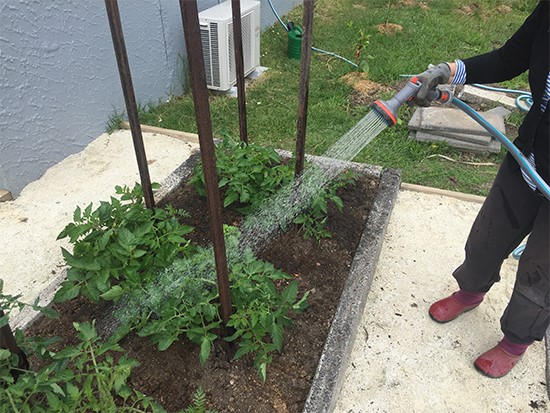 I’m going to put some lucerne chaff on the tomato bed because the plants are quite delicate and it’s easier to get round the companion plants than straw. Lucerne chaff is definitely premium mulch. Sometimes you can get it a bit cheaper if there’s old stock (last year’s) available, but that doesn’t happen often. The great thing about lucerne chaff is how it adds lightness to your soil. 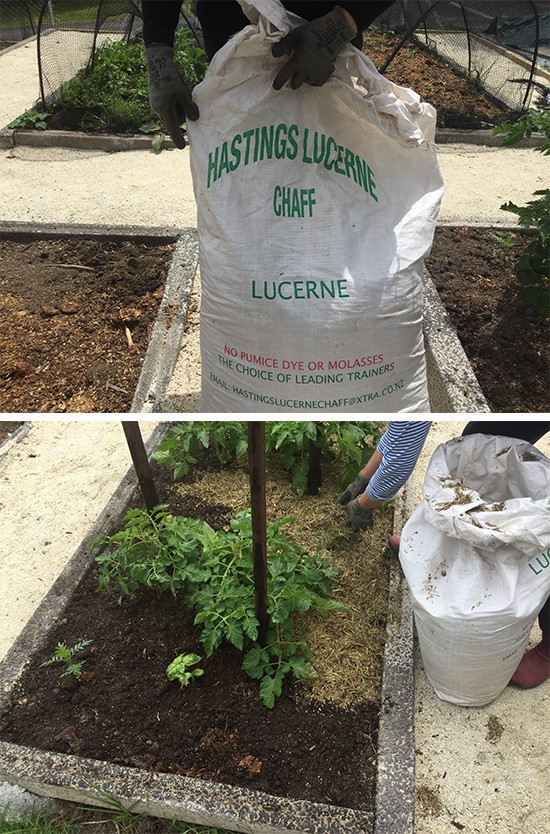 Then I water the lucerne chaff down so it doesn’t fly away. 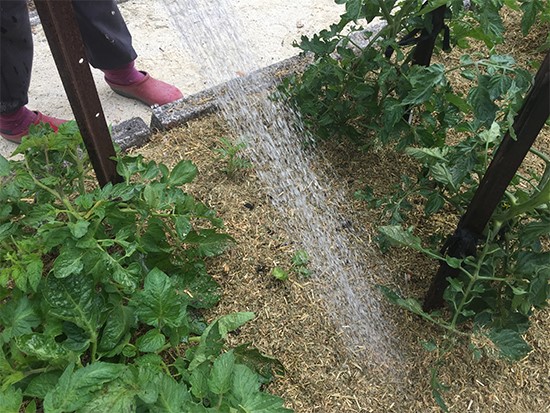 And lastly, we’re going to apply some of our comfrey tea to the tomatoes. It’s been two weeks since we started this brew. I give it a good stir to combine the broken down plant material into the liquid, then mix up half comfrey tea and half water – the rule is that it should be the colour of weak tea when applied to the plants. Pour generously over leaves and soil for a good feed. 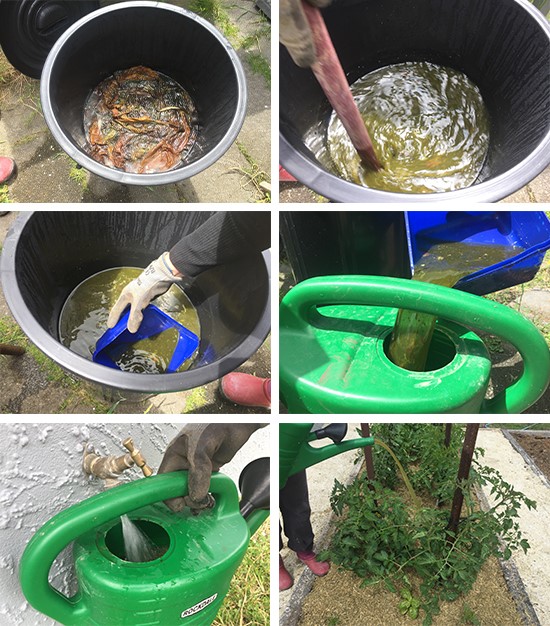 One tip for your wandering plants: put a stick near the roots of the plant so you know where it starts, as that’s the place you want to water. Once they get wandering it’s often hard to know where they started from! Probably best to do this at the time of planting. 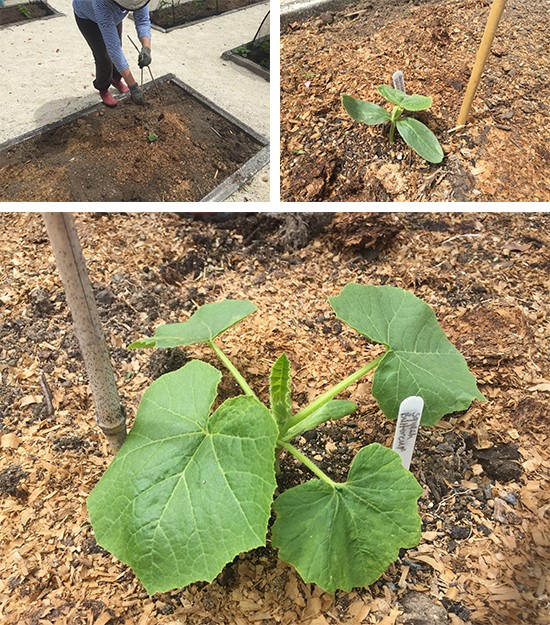 The zucchini and cucumber bed get a good layer of straw after a water. And once again I water the straw down to stop it flying away. 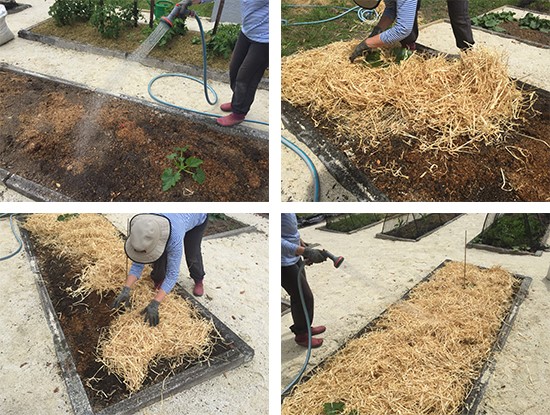 I put the remainder of the lucerne chaff round the beans. They’ll be in for a while and need lots of moisture to be crisp and not stringy. 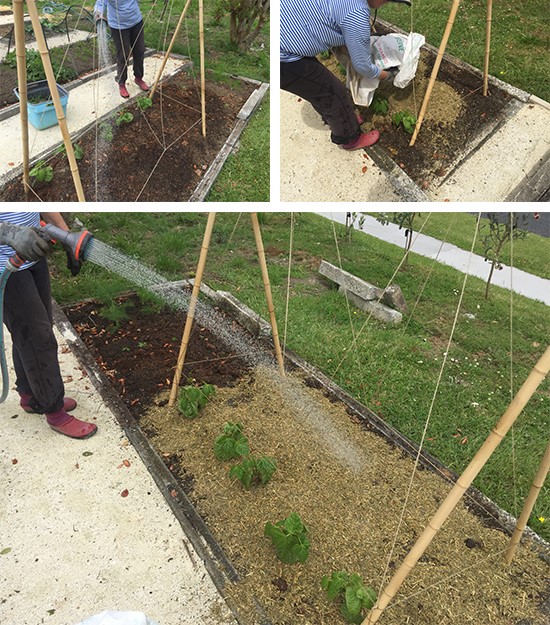 Then I top up the tea bucket. Our own comfrey plants are pulling away and I can take a few leaves from these plants. I can use all my weeds as well. But I did encounter quite a bit of shoofly (even one flowering!) and as these are toxic, they won’t be added. I actually sifted my weeds first to take off any excess soil. Then while I was doing that I noticed some cleaver (bidibidi) and thistle (puha) right where I was standing, so that went in as well – the joys of having a yet-to-be-developed backyard! Add more water and stir through before putting the lid back on.

Here’s a video of Rob doing all this and more at his place, which you might like to watch as well.