This week we got the garden beds finished – just! There’s plenty more needing to be done, but at least I could plant. Here’s the Before and After. Many thanks to Gavin Olson of Olson Landscapes for figuring out how to step down the slope (and much more).

I realised if I put my foot down I could take advantage of the Full Moon phase and get the important crops of carrots, parsnips and potatoes in the ground. My son had a day off on Thursday and he managed to get a couple of his mates over to shovel 4 cubic metres of Central Landscape’s Supreme Mix (a combination of Waikato topsoil, compost with no bark, and pumice sand – good recipe that holds together well when you squeeze a handful). 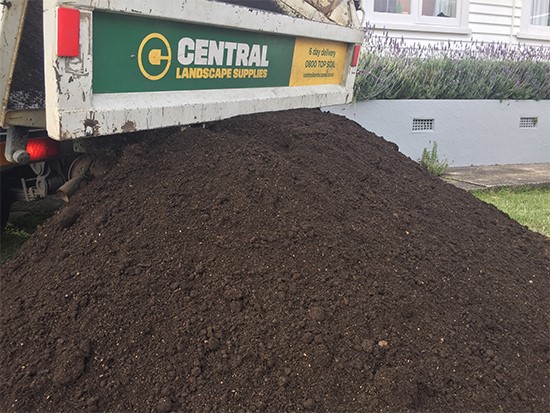 It would have been better to let the soil shake down and settle, but I have gone ahead sowing and planting nevertheless. Timing was good and I made that the priority.
Being root crops I added only rock dust to the beds. You don’t want to put any nitrogen in the soil as that just encourages leaf growth over root growth. Using a fork, work the fertiliser in. Rake the soil till it’s nice and smooth. Key thing with root crops is having deep, friable, fluffy soil for the vegetables to penetrate easily and not become deformed in their effort. If your soil is compacted after the winter rains, take the time to free it up with a fork or broadfork before sowing root crops.

Then using the end of your rake make shallow rows for the seeds. Our beds are about 1100mm wide and I reckon 3 rows of parsnips will be more than enough. Parsnips are happy to sit in the ground till you’re ready to use them which is why I did sow 3 rows. Flop a small amount of soil back over the rows and firm down with the back of the rake.

The carrots got 4 rows. I used up all the seeds in the packet as we eat carrots all the time, whether as a feature or just in the body of the meal. I’m curious to see if a packet of seeds will last until the best time to sow them again which is autumn. I was talking to my son, who was taking the photos, while I was sowing and I got a bit distracted, so I have the feeling there might be some incomplete rows. I also think I sowed the carrots a bit thickly, in other words, I could have got 5 rows out of the packet.

I also put in one row of ‘Milan White Red Top’ turnips which we’ll use when they’re small and sweet, grated in salads – beautiful combined with grated carrot. And one row of Spring Onions ‘Tokyo Long White’. I probably should have put the onions beside the carrots as they’re great companion plants. I was thinking tallest to shortest, but either way, the onions should have gone next to the carrots!

A nice sprinkling of water to bed the seeds in. Then we laid an old towel, wettened, on the carrots. Carrots are traditionally a bit difficult to germinate (which is why we recommend always getting fresh carrot seeds) and I think it’s the consistent moisture from the towel that makes all the difference. We’ll lift it in about a week.

Then it was time for the potatoes. They’ve had 3 baths with liquid seaweed added over the past month and the chits are looking good.

I added rock dust to the soil and forked it through as for the seeds. Then dug trenches for them – I have 3 types (Rocket, Jersey Bennes and Cliff’s Kidney) so it made sense to put the 4 of one variety in its own row. I’m hoping they have enough space. They are about 200mm apart. I think because my soil was a bit soft that I didn’t dig the trenches quite deep enough. The hills on each side were certainly high enough, so we’ll just see how they get on.

Ideally you would put comfrey leaves in with the potatoes, but I don’t have any myself and the leaves on Rob’s plants are just too small to be of any use. Rob says I can add the comfrey when I do the first hill up, that is when I see the leafy shoots appearing above the soil. I added Neem Tree granules in with the potatoes though to help withstand a potential attack from psyllids, and neem is great soil conditioner too. Then around 50mm of soil on top of the seed potatoes and a good water. Need to get some signs made up so I remember which is which, but will do that in due course. 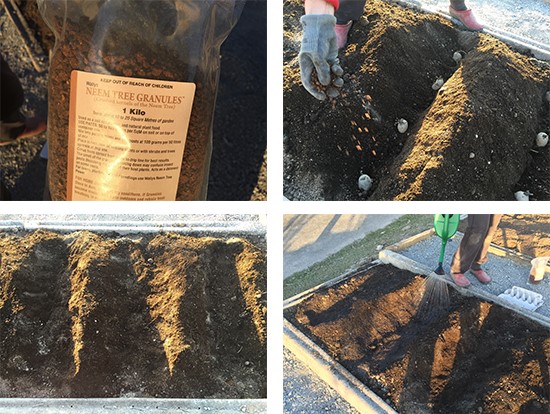 Round the back, our ‘Black Cherry’ tomato (singular) seedling, Capsicum ‘Marconi Red’ and Eggplant ‘Black Beauty’ are big enough to transplant out.

And the little bed on the side is going to be the official insectary, so I sowed some borage, phacelia (bees love blue flowers apparently) and marigolds (especially for the tomatoes). 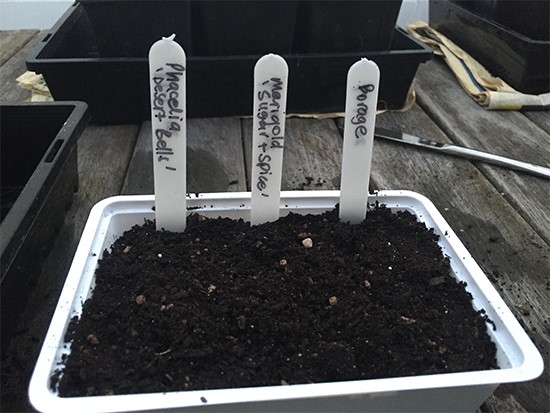 Making hoops and getting some netting to protect the seeds is the next job. We don’t have pukekos like Rob, but there are cats and I sighted a pair of ducks the other day too. Enjoy the stretch of beautiful weather!