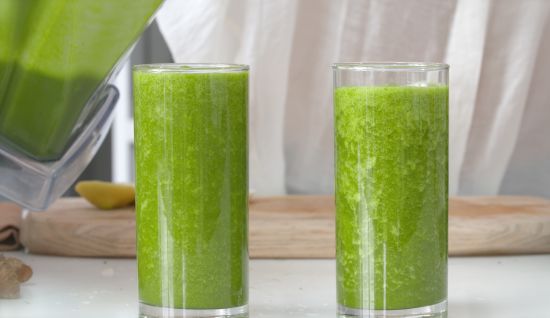 … is a plant-based chef who founded Little Bird Organics littlebirdorganics.co.nz

Here’s her recipe for…

And here’s the webisode.

This is a version of my daily smoothie. Not many days go by when I don’t drink a big green smoothie. I like to add herbs, as well as some citrus like lemons or grapefruit, to balance out the flavours. You can leave out the apple if you don’t feel you need any sweetness.
Drinking a big glass of green vegetables in the morning might not sound appealing at first, but it really can be life-changing and addictive! All that wonderful fibre and abundance of micro-nutrients contributes to a healthy system and gives you the energy and vitality that sometimes feels a little elusive in our busy lives.

Strip kale leaves from their stems and add to blender along with all the other ingredients. Blend for around 30-45 seconds or until completely smooth – this smoothie tastes a lot more delicious when smooth and a little cold.
You could add a little extra water while blending if your smoothie is too thick.
Makes 2 cups.

This is a delicious, sweet, creamy, green smoothie that I make for Pepper, or when I feel like something sweet and tropical. It’s something that most kids will love and a great place to start if you’re curious about trying a green smoothie but my Drink-your-greens Daily Smoothie is looking a little too green just now.

2 kale leaves
1 banana, frozen
½ pineapple, peeled, cut off from core and frozen
a handful of mint
1 cup coconut milk Recipe for how to make Coconut Milk on this page.
½ lemon, peeled and whole

Strip kale leaves from their stems and add to blender along with all the other ingredients. Blend for around 30-45 seconds or until completely smooth.
Note:
Ideally use frozen fruit in your smoothies to add more body and texture. It also affects the flavour. If you don’t have frozen fruit, you could add a cup of ice to this one too.
Makes 2 cups.

… is a naturopath and nutritionist nelliepigot.co.nz

Kale is extremely high in Vitamin C. One cup of raw kale has more Vitamin C than an orange. Kale is also high in Vitamin K which is important for getting our blood to clot. Kale is a huge source of calcium, magnesium and potassium, important minerals that are often deficient in our modern diet and great for cardiovascular health, bone health and protection against diabetes.

Finally, kale, being a cruciferous vegetable like broccoli, cabbage and brussels sprouts, is high in sulforaphane and indole-3-carbinol which have been shown to have protective effects against various cancers and are great for liver detoxification and elimination.