one of the best ways to beat the late-summer heat

In the true tropics the dry season (winter) is the best time to grow watermelons, but if you live in a cooler climate, then summer is the growing season.

You need at least three months of reliably hot, sunny weather to grow and ripen a watermelon. During that time your average daily maximum temperature should be at least 20-25°C.

« Watermelons are part of the cucurbit family
which includes cucumbers, zucchini and pumpkins.

The secret to success when planting cucurbits is having really rich soil. Prepare your beds with compost, chicken manure and rock dust. And mound the soil high to keep warmth in and the soil free-draining. Watermelon vines can reach 5-6 metres long, so plant them where there’s plenty of open ground.

Watermelons will need to be mulched once planted. You can use recycled cardboard for this purpose or oat, pea or lucerne straw. If you choose cardboard, you’ll need to water the soil first then lay it down before planting. Cut an ‘X’ in the cardboard and fold under the four corners to create a square for each plant. Then place a few bricks on the cardboard to keep it from moving while planting. We’ll use weed mat pins to hold it down in the long term. It’ll keep the leaves off the ground and help keep the soil moist and at an even temperature. The cardboard will break down in a couple of months’ time and puts carbon back into the soil, as does mulch.

Watermelons grow easily from seed. They germinate within a few days. You may be tempted to use seed from a watermelon you bought, but don’t waste your time – it’s almost guaranteed to be a hybrid which doesn’t grow true to type. Start your watermelon seeds in the ground where you want them to grow. The soil should be at least 18°C.

If you’re planting seedlings, give your plants a good water before you take them out of their pot. Cucurbits have a delicate root system, so take care not to disturb the roots when planting.

Water your seeds or seedlings in well, but once the plants get growing, stop watering them. If you continue to water them, you’ll destroy the flowers so they can’t set, so they’re best left alone during the growing period. As watermelons start to mature, the lack of watering intensifies their sweetness.

Knowing how to determine when a watermelon is perfectly ripe is not easy. Some people watch the tendril closest to the melon stem. When it turns brown and dries up, the melon is ripe. The trouble with this method is that with some watermelon varieties, the tendril dries and drops off more than a week before the melon is fully ripe. Tapping the watermelon is another method – if it sounds hollow and dull, it’s considered to be ripe.

The surest sign of ripeness in most watermelon varieties is the colour of the bottom spot where the watermelon sits on the ground. As the watermelon matures, the spot turns from almost white to a rich yellow. Also, all watermelons lose the powdery or slick appearance on the top and take on a dull look when fully ripe. 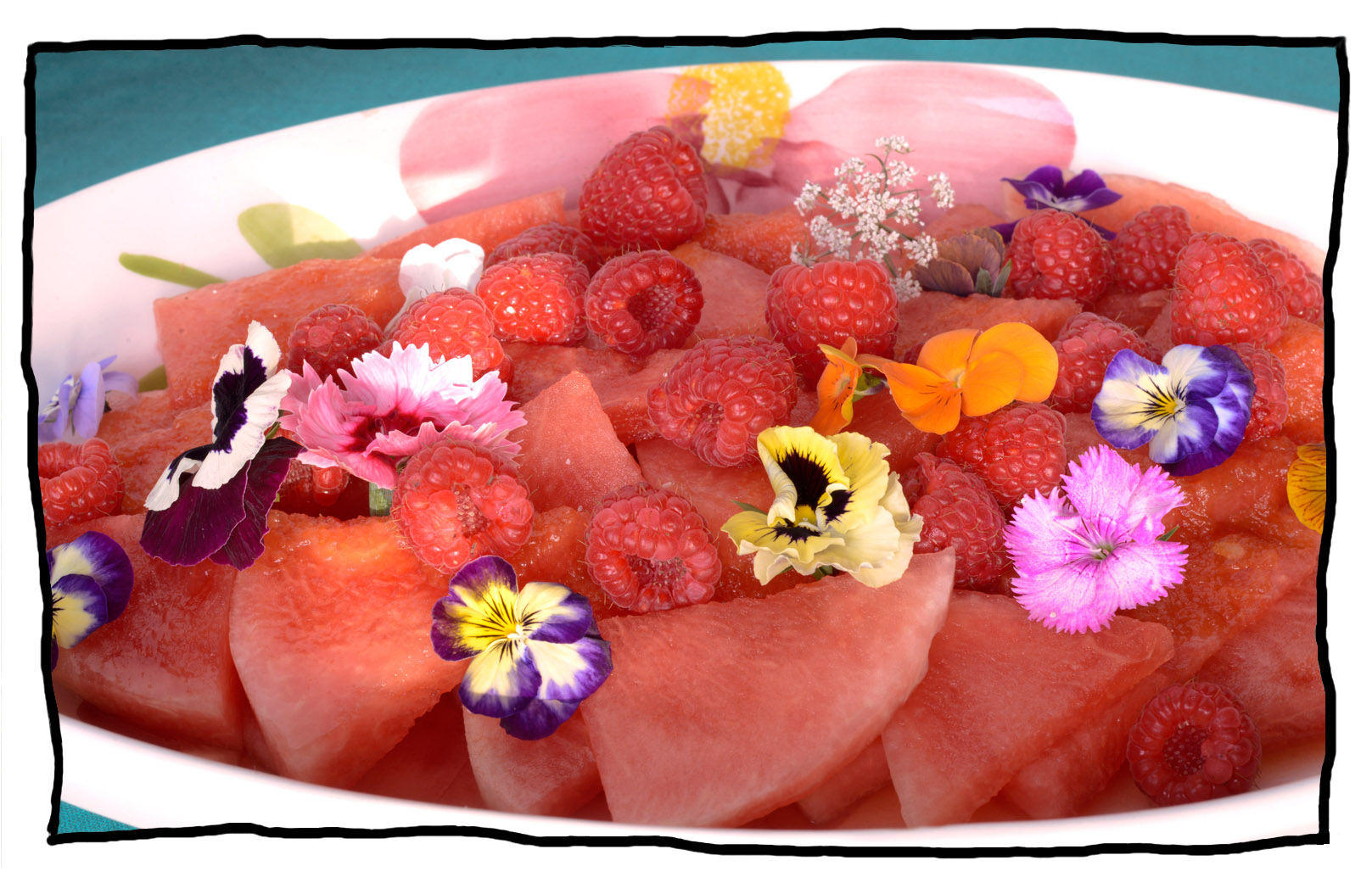 SYRUP:
In a food processor, process the watermelon until smooth. Tip into a small saucepan with sugar and lemon juice and bring to the boil, stirring to dissolve the sugar. Boil for 8 minutes until reduced and syrupy. Cool and chill.

TO ASSEMBLE:
Cut all the skin and white pith off the remainder of the watermelon and slice into small triangles. Arrange on a platter, pour syrup over, then scatter raspberries over and finally edible flowers.

« Watermelons originated in the Kalahari Desert in southern Africa and they’ve adapted so their roots will go down 2 metres looking for water.