the most delicate of fruits

Raspberries don’t like hot summer temperatures, so in warmer climates choose a site that protects plants from afternoon sun. Otherwise raspberries like an open sunny position. Exposure to wind is not a problem but they won’t tolerate salt. Raspberry flowers are self-fertile and pollinated by insects, so avoid a very windy site. It’s best if you don’t plant where any of the solanum family – tomatoes, potatoes, peppers, eggplants – have been previously as they leave behind diseases that attack raspberries.

« Winter is the best time to plant raspberries.

Raspberries fall into two categories. The summer-fruiting varieties which are the most common, also known as flora canes, grow to a height of 1.5–2m. They produce high yields of fruit on canes that grew the year before. Autumn-fruiting raspberries, or primo canes, produce their berries on top of their current season’s canes and are usually shorter in growth. They’re also known as ever-bearing raspberries even though they fruit in spring first, then again in autumn.

During winter, you can buy bare-rooted raspberry canes that are about 20–30cm tall. They do best planted in rows that run north to south so the entire plant is exposed to sun during the day.

Well-drained soil is essential as plants don’t tolerate wet feet and may succumb to root rot. If necessary, build a raised bed and dig in plenty of organic compost. They like slightly acidic soil with a pH of 6.0-6.5.

Plant raspberry canes 80cm to 1m apart into a hole that has been dug over earlier with manure and compost. Sprinkle a handful of rock dust round each plant after planting. Roots are close to the surface so the plants will benefit from mulching and regular watering during dry periods. Use netting to protect the fruit from birds.

Each plant will send up lots of new canes in its first year. These reach about 1.5m tall and need the support of a post and wire structure, trellis or fence to tie the canes to.

You can do this in a variety of ways. Firstly there’s the single fence idea which is ideal for summer-fruiting raspberries in a small garden. Drive 2.5m long and 75mm in diameter posts into the ground to a depth of 75cm at 5m intervals. Stretch 12 gauge (3.5mm) galvanised wire between the posts at 60cm vertical intervals. After planting, tie in the canes along one side of the wires. Keep the fruiting canes on one side and young new canes to the other side of the wires as the season progresses. In autumn, the fruited canes can easily be pruned out and the young canes will be separate along the other side of the wire.

Then you can make a single fence with parallel wires. This system is well suited to autumn-fruiting raspberries. This way you don’t need to tie in your canes but picking is more difficult and there’s a greater chance of fungal problems in the more crowded conditions. Drive posts the same size as above (2.5m long and 75mm in diameter) into the ground to a depth of 75cm at 5m intervals. Attach two short horizontal lengths of timber to each post, one at the top, and one 60cm below. Stretch 12 gauge (3.5mm) galvanised wire in parallel lines along the ends of the horizontal lengths of timber to create two parallel lengths of wire along the fence. Stretch thin wire or garden twine between the parallel galvanised wires as cross ties, every 60cm along.

Lastly there’s the single post idea which is ideal for the very small garden. Drive the same size post as above into the ground to a depth of 75cm. Plant two or three plants around the base and tie in the canes.

In mid-spring, sprinkle a handful of rock dust around each plant, then add a mulch of garden compost or well-rotted manure. This prevents weeds, which compete with the plant for water and nutrients, from growing.

Harvest berries when they’re sweet and ripe. Pick them as early in the morning as possible when they’re cool. If berries are wet, let them dry before picking. Eat them straight away or dry or freeze them. They don’t keep ripening after harvesting. Raspberries slip off the stem when picked, leaving a hollow inside the fruit.

Newly planted summer-fruiting raspberries should be left alone for the first year to establish themselves. But after that they need regular pruning to maintain health and produce better quality crops.

Summer-fruiting raspberries produce fruit on 2-year-old-canes. In winter after harvest, cut down the old, greyish brown fruit-producing canes, but leave the new, current-season canes to produce berries next year. Select the strongest young canes, around six to eight per plant, and tie them in 8 –10cm apart along the wire supports. Cut the remaining young stems to ground level.

Autumn-fruiting raspberries require a slightly different method of pruning. They’ll produce fruit on the top third of the plant during their first autumn. After fruiting, remove the portion of the plant that produced berries, but let the lower two-thirds of the plant remain to produce next spring’s crop. Remove the canes completely after they’ve fruited over their entire length. New canes will quickly emerge to replace the spent ones. Don’t cut off the new canes that haven’t produced yet as they’ll produce the next year’s crop. 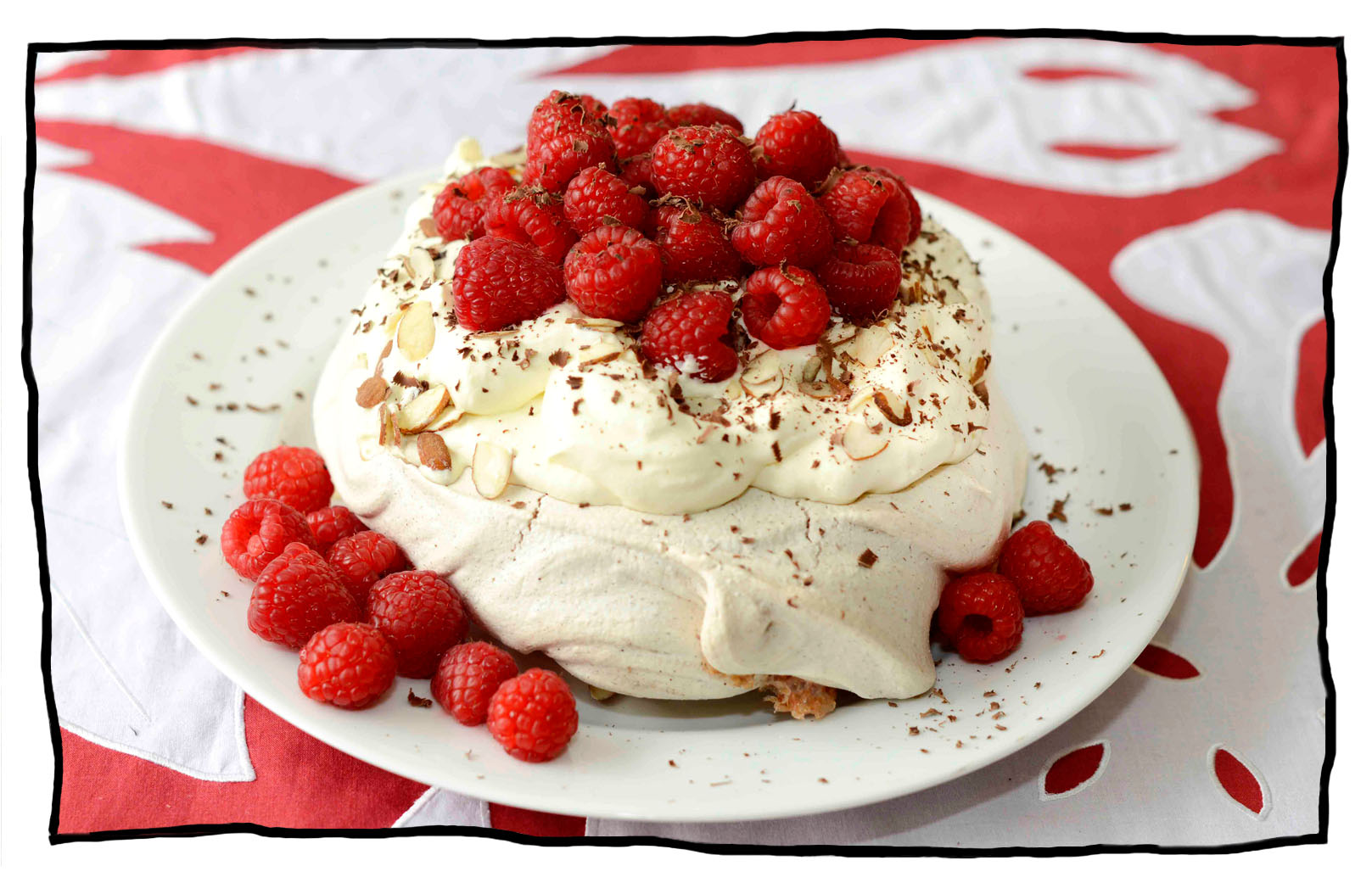 The key I find to making a successful pavlova is having all your ingredients measured out and being able to add them all in without stopping the beater. You need to make the pavlova quite quickly. Here we go…

Preheat your oven to 200°C. Put a little butter or oil on the baking tray then place baking paper on it. This means the paper will stay in one place while you’re spooning the pavlova mix on to it and it helps remove the paper from the pavlova at the end too.
Using an electric mixer, beat the egg whites until soft peaks form. Once soft peaks appear, add the sugar a couple of tablespoons at a time beating each addition well. It needs to be a continuous process to trap as much air as possible in the egg whites. You’ll see the mixture change texture almost immediately, from loose, soft peaks to a more glossy mixture. It’s probably around 45 seconds between each addition of sugar.
Add the vinegar and beat for about 5 seconds. Sift the cornflour and cocoa over the egg white mixture and, using a clean spatula, gently fold in the cornflour – no more than about 8 folds.
Spoon the mix on to the prepared tray and mould it into the shape you want – keep it quite high. Don’t mess with the mixture too much, though, as you want to get it in the oven quickly.
Place the tray in the middle of the oven and immediately turn the temperature down to 120°C. Cook for 1½ hours but don’t let the pavlova colour. You may see a little sugar syrup seep out of the bottom but the crust should be firm. Inside, it will be soft and marshmallowy.
Turn the oven off and leave the pavlova inside for around 3 hours or even overnight, if you make it in the evening. It will keep in an airtight container at room temperature for two days. Don’t refrigerate it.
When you’re ready to eat the pavlova, beat the cream till firm and carefully spoon it over the top of the pavlova. Sprinkle almonds over, then raspberries and lastly grate chocolate over the raspberries.
Sublime!

« Each raspberry consists of around 100 individual tiny fruits, called drupelets, filled with one seed.