the fruit that’s really a vegetable

Rhubarb crowns are best planted in spring when the soil is warm and moist. Grow rhubarb in a sunny position, although it can tolerate semi-shade. Rhubarb plants will grow in the same spot for 4-5 years, so prepare the soil well before you plant them. Dig in plenty of compost to a depth of about 50cm and clear away all perennial weeds (as they’ll be difficult to remove later).

When planting rhubarb crowns, set them so that the crown sits proud of the soil level. This will help to prevent crown rot. Rhubarb plants can get quite large so allow a spacing of 75cm to 1 metre between them. Apply well-rotted animal manure and rock dust round the plants after planting and water in well.

« Rhubarb are gross feeders, so we recommend planting them
away from other vegetables or in a bed of their own
so they don’t rob nutrients from other plants.

Once your plants are in and established, we suggest the following activities throughout the year…

Spring: Remove rhubarb flowers as they appear. This will direct the plant’s energy into growing tasty stems instead of flowering and setting seed. Rhubarb plants will also appreciate an application of animal manure (like sheep pellets or chicken poo) and rock dust in spring to give them a boost.

Summer: Water rhubarb plants during dry periods to prevent the soil from drying out.

Autumn: Remove dead leaves and stalks round plants. Don’t use secateurs to chop anything off a rhubarb plant as it can cause rot and affect the crown. Apply a mulch of well-rotted animal manure around the crown of the plant. This will help to conserve moisture in the soil and keep the weeds down, as well as feeding the plants for the following growing season. Take care not to cover the crown as this may cause it to rot. Rhubarb leaves are high in oxalic acid which can be harmful, so don’t put the leaves in a worm farm. In small quantities they’re fine in hot or cold compost heaps.

Every 4 or 5 years in springtime you’ll need to lift and divide rhubarb crowns to ensure they remain productive. Start by pulling many of the stalks off the plant you choose to divide, leaving a few young stalks and leaves on. Using a spade, carefully dig the old crown out, trying to keep as much of the root system as you can intact. Work out how the crown can be divided up (you should get 4-6 new plants out of one old plant). Each piece should have some crown on it and some root. Some of it can be pulled apart by hand, other parts will have to be chopped into pieces with your spade. If there’s a hugely long root system, you can reduce that with a spade. Two plants are usually enough for one family. Plant as above. Water the new plants in well and if the weather stays dry, water again in a couple of days’ time. As you’re establishing new root systems, it’s important the plants don’t dry out at all in the first two weeks.

When you come to harvest rhubarb, pull each rhubarb stalk from the base of the stem and twist it away from the crown. Don’t use a knife as it can cause the rhubarb crown to rot. It’s important to only harvest a few stems at a time (if you want more rhubarb, then better to have more plants). Over-cropping reduces the plant’s vigour.

It’s best not to harvest at all from your plants during the first year after planting. Remove a few stems the next year, then up to a third or half from then on.

Rhubarb leaves are toxic, but surprisingly if you cut or pull the leaf off the stalk and lay it on the soil surrounding the plant it acts as the perfect mulch and feeds the plant.

We think the best way to prepare rhubarb is baking it. Lay rhubarb in an oven dish, sprinkle with sugar (use less in the beginning as you can always add more later) and zest of an orange. Pour the juice of the orange over the top and bake for around 20 minutes at 180°C. 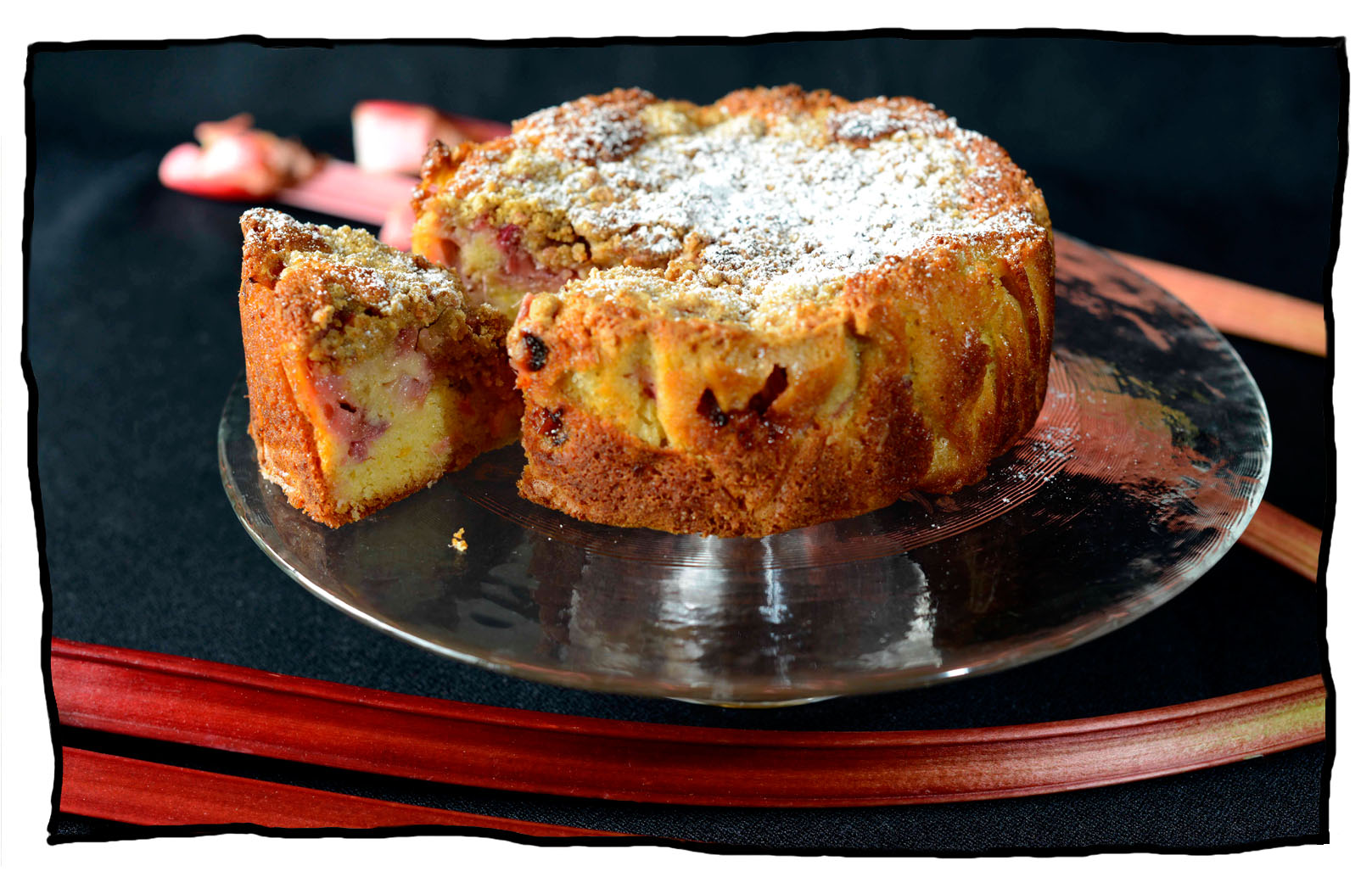 Buckle cake gets its name we think from its appearance. The base of a buckle is a rich cake batter which is sprinkled with fresh fruit and a streusel mixture on top of that. During the baking process, the cake batter rises up around the fruit, encasing the fruit in batter and causing the streusel to buckle.

Line a 19cm round cake tin with cooking paper. Preheat oven to 170°C.
Stir rhubarb and half the sugar together; set aside to macerate.
Cream butter and sugar together.
While the butter is softening, make the streusel topping: Put the flour, brown sugar and ginger into a bowl. Add melted butter and make into a crumble with your fingers.
Beat in eggs one at a time into the creamed butter and sugar mixture. Add orange zest, sour cream or yoghurt and vanilla essence.
Fold in flour and baking powder using a large metal spoon. Pour the cake batter into the prepared tin.
Carefully layer the rhubarb over the top. There’ll be quite a bit of syrup now, but I pour that over the cake batter and fruit. Finally layer the streusel topping over the fruit.
Bake for up to 75 minutes. You may need to put some tinfoil over the top to stop it from burning towards the end of the baking. It’s a fine line between making sure the cake batter is cooked through but doesn’t get too dry. The fruit is heavy and the cake may sink a little in the middle when you take it out of the oven, but it is truly delicious.

« Delicious pink and red rhubarb stems make a welcome sight in spring when there are few other crops available.
)