a vegetable that’s super easy to grow and for most people absolutely delicious, especially when double-podded

Even if you’re one of those people who don’t like the taste, the value of the broad bean as a soil conditioner is undoubted.

Also known as the fava bean, the broad bean produces an abundant food crop. It’s a good source of protein, fibre, vitamins A and C, potassium and iron. In addition, it is also extremely useful because of its ability to fix nitrogen in the soil.

Broad beans are easy to grow and like well-dug soil enriched with plenty of compost. They don’t like being waterlogged. Sow your seed directly at a depth of approximately twice the diameter of the seed and space plants about 15-25cm apart. Sown reasonably closely together they’ll support each other as they grow and probably won’t need staking.

Broad beans grow best in sunny locations, but they will tolerate some shade. Make sure you choose a location with plenty of air movement as broad beans can succumb to black spot in northern regions.

Tall cultivars may need staking. But if you pinch out the tips when the lowest truss of blossom has formed small pods, this will not only promote fruit set, but will help bulk up the plants and make them self-supporting. The tips you pinch out are excellent in salads and stir fries.

« Broad beans should be ready for harvest
90-160 days from sowing.

When there is little else flowering at this time of the year, the pollen and nectar of broad bean blossoms are important for the bumblebee colony to feed on. We need bumblebees in our garden later in the season to pollinate tomatoes.

For the most tender beans, harvest them when beans have begun to visibly swell inside and before the pods have fully developed (when the pods are 75-100mm long). Harvest the lowest pods first – small beans are sweeter and more tender than large ones.

When the beans are young you can eat them whole, but they are at their best when you not only remove the outer shell, but also the grey skin to reveal sweet green beans within. If you have an oversupply of broad beans you can remove them from the pods, and blanch and freeze them for use later.

Keep picking the beans as this encourages the plant to produce more pods. When your plants have finished bearing, simply chop the stems and turn back into the soil for a free, nitrogen-rich manure, readying the soil for spring planting. 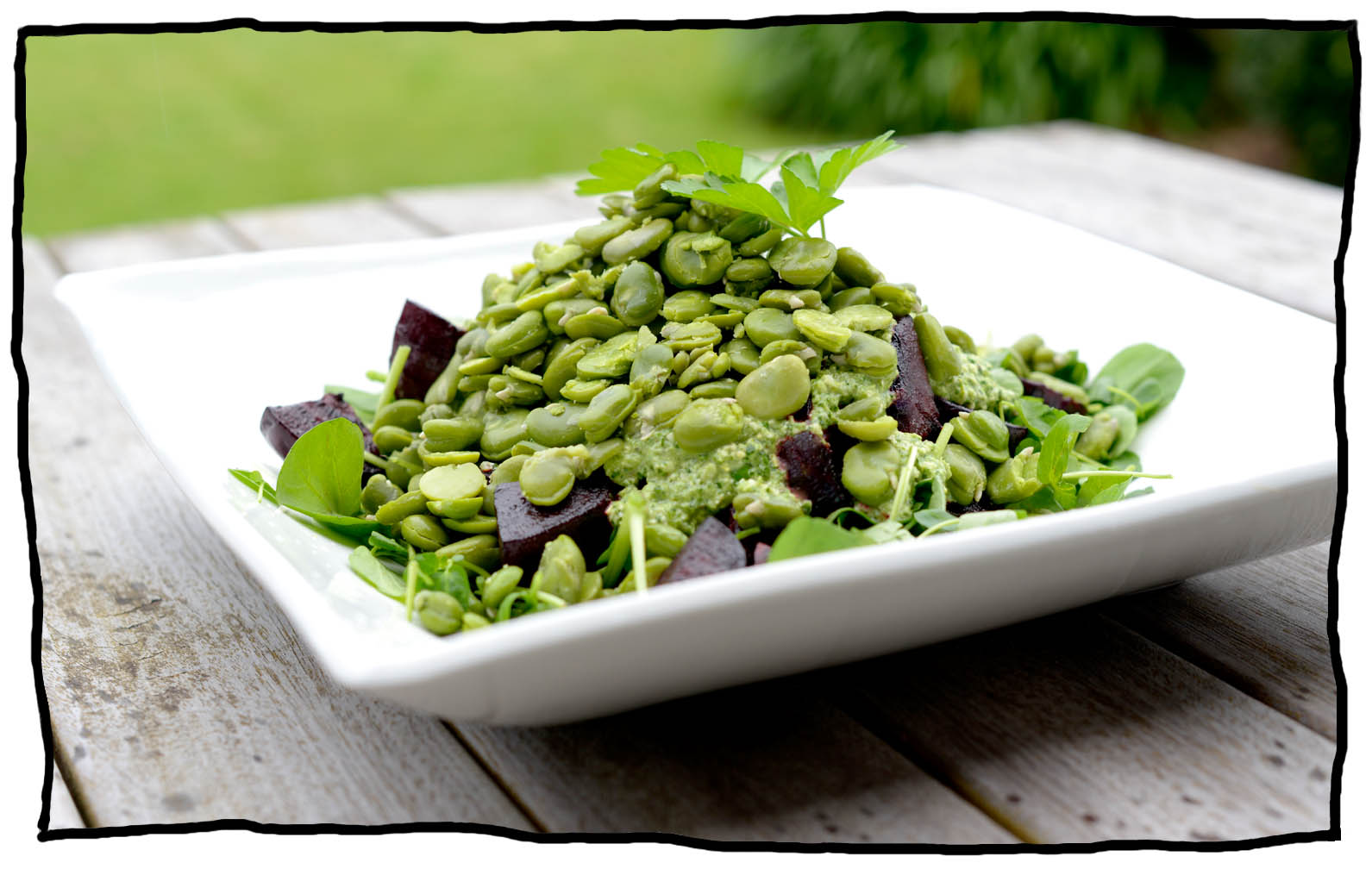 Preheat oven to 180 degrees.
Place the beetroot in a roasting dish, toss with olive oil, salt and pepper and roast for 40 minutes, turning occasionally, until tender. Cool.
Blanch the broad beans in boiling salted water. Peel the broad beans to reveal the green beans inside.

Pesto:
Place all the ingredients in a food processor and process until smooth. Season with salt.

To serve:
Lay watercress on serving dish.
Place roasted beetroot on top.
Carefully spoon pesto on top of this, and lastly dress with broadbeans.
Garnish with parsley.

« Broad beans ripen from the base of the plant upwards.