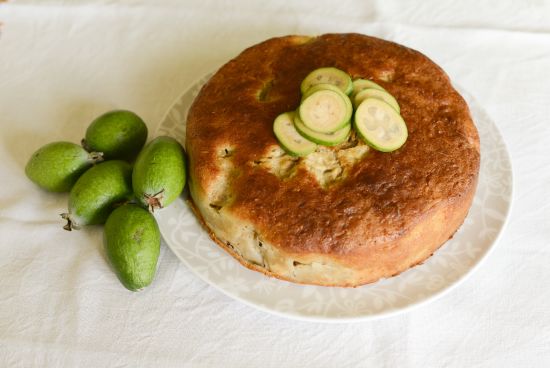 Preheat oven to 170C. Line a 24 cm springform cake tin with baking paper.
Cream butter and sugar, then beat in yolks one at a time, for a minute after each addition.
Add the coconut, then flour and baking powder. Fold through and when it’s about half done, fold the milk and sour cream through as well. Set aside.
In a separate bowl, beat the egg whites until they form soft peaks. Fold through the yolky batter until mostly incorporated, then fold through the feijoa.
Pop in the oven and bake 50-60 minutes, until a skewer inserted into the centre comes out moist but clean.

On medium low heat, bring the mixture to a bare simmer, until the sugar dissolves. Drizzle over cake while warm.